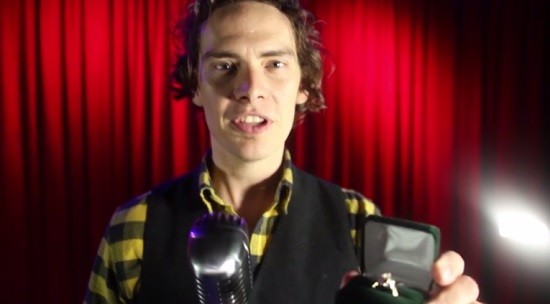 Curtis Brewer of local folk/pop group Yankee Racers created more than just some visual stimuli to accompany "For Ever," a song from the group's upcoming American Music album -- he created a new family. Well, I suppose I should say he proposed the creation of a new family -- it took a "yes" from Warsaw printmaker Ewa Budka to seal the deal.

Brewer and Budka met by chance though the latter's 2014 residency at St. Louis' Paul Artspace. (Budka is a Polish national, a 2013 graduate of the Academy of Fine Arts in Warsaw and a Rector's Honour recipient.)

The video was filmed at Off Broadway, and it opens with Brewer alone onstage with an acoustic guitar, singing the opening lines: "I still believe those first words that came to my mind / You are the first woman that I can look straight in the eyes." Brewer is soon accompanied by cello and banjo as the song moves into its chorus: "Lay down; this is our moment / Just you and me and forever / I'm yours; you're mine, together / Nothing to do, nothing to change / Stay drunk on dreams in infinite ways / We can live like this forever."

As the song progresses Brewer is joined by a standup bass and piano as well, swelling to a quintet as it moves into a driving bridge/outro. Proceedings take an extra personal turn at the 5:30 mark, as Brewer looks directly into the camera, presents a ring, and proposes to Budka in her native Polish. The entire affair is intimate and moving, among the most heart-on-your-sleeve moments ever captured on film.

Watch the video below, read our review of Yankee Racers' newest album on the next page and head to the Schlafly Tap Room this Friday and join in the celebration: She said yes.

Jump to comments
« Video: St. Louis' Hibdon Hardwood,…  |  Getting Post-Tour Stench Out of the… »