Overheard at the Gathering of the Juggalos 2014: The Best Quotations

Another Gathering of the Juggalos has come and gone, and with it, thousands of face-painted, fun-loving freaks and misfits to and from the event's first year in Thornville, Ohio. While the move from the deep wilderness of Cave-In-Rock, Illinois, to this year's decidedly more inhabited location did make the experience seem less like being on another planet, there was still an overabundance of hilarious and strange things happening at all times.

Here are the best overheard quotations from the 2014 edition of the Gathering of the Juggalos.

"Do you guys know who I am? I'm an ugly motherfucking piece of shit, and I don't give a fuck. And I came here to party."

- A confused soul who had stopped too long to talk to a man who was clearly out of his mind on drugs.

"If that bottle rocket gets near my dick I'm gonna be pissed."

See also: Ten Reasons Juggalos Are Better Than You

- Chanted at female wrestler who had just lost a fight.

"Fuck her right in the pussy!"

- Shouted by everyone, all of the time, constantly. Juggalos have really latched onto that meme.

"Y'all wanna talk about politics, or you wanna see people get smashed in the face?"

"Our sexy little midget you may have seen on Hulk Hogan's Micro Championship Wrestling."

- Uttered by the Guy Fieri of juggalos, Mike Busey.

- Shouted loudly from the woods.

"There's only one one-legged wrestler in the world." 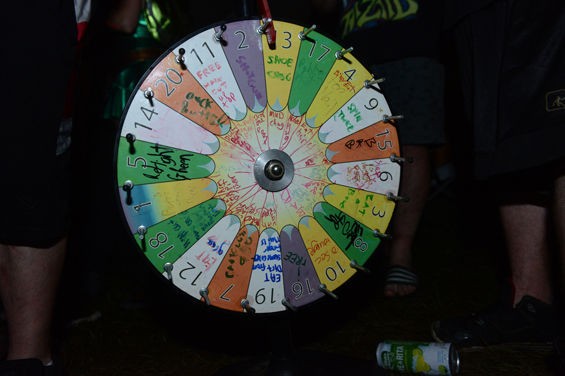 "Lick the lint out of somebody's belly button."

"Bring me a poop dollar. It don't gotta be your poop; there is poop all over these grounds. Go find some."

[After digging a hole in the mud with his heel and pouring beer into it.] "Chug the mud!"

"You don't gotta whip your dick out, just act like you do, and then you and a friend walk up on people."

- All stated by a man named Frog, proprietor of "The Wheel." Frog would ask people if they wanted a beer as they passed by. If they said yes, they would be encouraged to spin the wheel, which lists a multitude of hilarious/disgusting potential outcomes. These are just a few of them. We hear even the police got in on the fun.

"If you got in my face, I'd shoot you right here with the gun in my pocket. You wouldn't even see it coming. And then you know what I'd do? I'd drink a beer. And feel no emotion at all."

- A normal-looking 61-year-old man seated in a lawn chair in the parking lot. It was his seventh year at the Gathering, which he drives his son to and then waits in the lot. He has never once stepped foot inside.

"I wanted to trip the cop. I mean fuck it; I got bail money."

- Juggalo who witnessed the police chase described above.

More quotations are on the next page.

Tags: The Gathering of the Juggalos, Image

Speaking of The Gathering Of The Juggalos