Review: The Mighty Mighty Bosstones, the Humanoids at the Pageant 9/12/2014 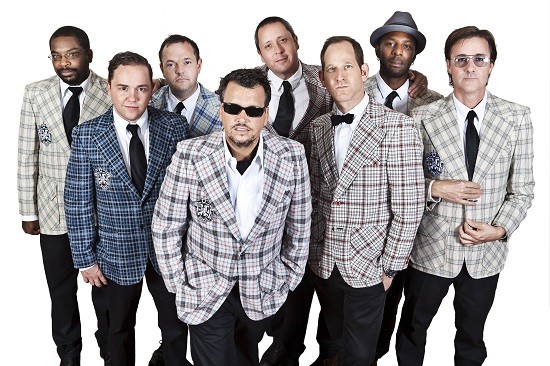 What a fun, goofy night for punk rock. The vibe in the air this Friday night felt like a high school reunion of sorts, with a bunch of people fulfilling a pact to all return to a time capsule of that which made 1996 great. It is unusual to see so many people over the age of 35 look as excited for the show as the young record collector nerds that show up. If you took a glance at almost anybody in the crowd who wasn't there as a favor to a ska-friendly relative/companion, you could see the mid-to-late 90's party flashbacks overcoming their senses.

The show kicked off around 8 p.m. with Jeff Burton from the Point's morning show coming out to jokingly tell the crowd to "fuck off" and introduce the Humanoids. This seemed to be a special set for the band, considering the size of the crowd and the addition of a third guitarist -- you know, for all those Iron Maiden-esque harmonies. The Humanoids has been the best pop punk/melodic hardcore powerhouse in town since 2007, with a sound akin to D4, Lifetime or Dag Nasty. The group's lively stage show was no let down on this night, proving the band can still live up to those notices.

After a couple songs the 'Noids seemed to tame the large stage and crowd. The highlight of this set was the inclusion of a few brand new tracks that hadn't really been played out before. These songs are longer and a bit more mature sounding than some of the bare-bones, minute-long anthems the band has written in the past. Regardless, it was a fun set, and it was nice to see some local boys grab some new fans from the Bosstones' loyal crowd.

As the night wore on, the anticipation in the crowd to see Boston's best ska-punk survivors built to a fevered pitch. At one point, "Sabotage" by the Beastie Boys came on while the road crew was getting everything together and the middle of the crowd started moving, slamming and pogoing and skanking as if there was a band onstage performing. There wasn't. The 30-minute break between sets ended as the lights dimmed and the Mighty Mighty Bosstones ran out, exploding into the fast-paced "Dr. D" from More Noise and Other Disturbances.

Jump to comments
« The Best Concerts in St. Louis From…  |  Popular Music Needs to Become Polit… »