Why Ariana Grande Is Terrifying 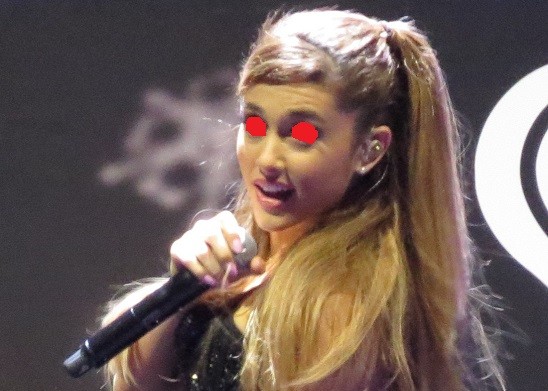 News reports have done nothing to quiet my petrifying fear of demon-plagued potential serial killer Ariana Grande. If she turns out to be a sociopath who takes over the world and destroys us, don't act like I didn't warn you in a completely reasoned way.

Her Family
Psychologists generally agree that sociopathy runs in families. One memory Grande has of her mother seems a little different from the typical nurturing: "When I was a little kid she smeared blood all over the walls in our new house and said O.J. did it." And then there's her brother, who detailed his fantasies for an elaborate killing of one of his housemates on Big Brother 16. So, OK then.

Her Mutability The ability to change one's emotions at the blink of an eye is a classic trait of sociopathy. Take a look at the footage of this conversation with the hosts of Good Morning America on the topic of Ariana's recently deceased grandfather:

For a second Ariana looks like she's going to cry. Then, everyone looks away and -- snap, nod, drop. If there's anything left on her face, it's cold, undiluted malice. This is the part when Ryan Seacrest wakes up in the middle of the night with "U DIE ALIVE LOL" written in blood across his chest.

Her Accent Speaking of abrupt shifts, observe the progression of Ariana's public persona. During an inane interview featuring questions inside of balloons, she sounds essentially the same as her character on the brain-meltingly idiotic teen sitcom Victorious, her sole source of fame at the time. Now compare this to an interview six months later after the release of her hit debut single, "The Way."

Asthmatic white girl to super-down and borderline ratchet over the course of a semester? You don't go from teen idiot to "urban cool" that convincingly unless you've got a Ted Bundy-esque eye for interpersonal control.

Continue to page two for more proof that Ariana Grande is to be feared.

Her Obsessive Fans
So who's getting attracted to the cult of Grande's music? What sort of folks are bumping her bubbly missives seemingly about the trials of love and independence? A week before her debut album dropped, someone created fake fan Twitter and sent dramatic #suicide tweets. That's like the most evil thing ever.

Ariana may have nothing to say, but her major television appearances are a study in bonkers public behavior. Disinhibition is one of the official traits of sociopathy, and despite her PR team's best efforts, Ariana cannot be inhibited. She goes on Ellen and makes uncomfortable jokes about underwear in a problematic accent. She takes over Total Request Live and makes mincemeat of the censors. She goes on the Today and makes Matt Lauer look like a pathetic, pandering creep. She does what she wants, and she will not be stopped.

Finally, in mid-September, reliable news source NY Daily News published a story stating that Ariana left a fan-clogged radio station and declared, "I hope they all fucking die" as she stepped into the elevator. This is, like, literal (alleged) proof.