Black Lives Matter: In a Year When Many Rappers Were Politically Silent, Jeezy Stepped Up 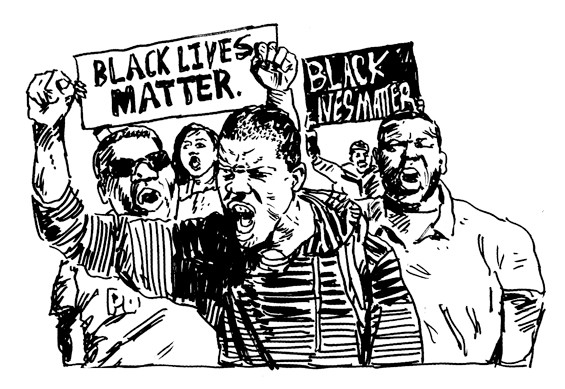 In the middle of shooting Snoop's new video, "My Fucn House," the two California hip-hop veterans casually sat down the Atlanta trap rapper, who was in the midst of a career lull.

All three men rap about dealing dope -- in fact, a drug heist was a plot point in the video. But Snoop and E-40 have earned reputations as elder statesmen of the genre. E-40, who is 47, once served as a mentor to Snoop, and went on to take the lead on peace treaties aimed at quashing the East coast-West coast beef in the late '90s.

"It was a 30-minute break before the next shot," remembers Jeezy, who is 37 and has since dropped the "Young." "I almost feel like it was a setup." Snoop, 43, imparted that the pair had been talking privately about Jeezy, and had a stern message for him. "We feel like you started off rapping to be a rapper, and now you're a leader and you need to lead," Jeezy remembers them saying. "You need to be mindful of your words and the things you say."

Snoop added: "You need to get out there."

It was a powerful message that Jeezy took to heart, as exemplified by his leadership following the August shooting death of Ferguson teenager Michael Brown. In a year that has seen massive, nationwide protests following the killings of unarmed African American men by police -- including Eric Garner's death by chokehold on Staten Island -- a big sidebar story has been the lack of support for the movement by rap's top names. While stars like Kanye West, Jay-Z, Lil Wayne, and Nicki Minaj have been quiet, Jeezy has been willing to risk his commercial viability to stand up for his principles.

Jeezy wasn't previously an apolitical rapper. An early Obama supporter, he encouraged voter turnout in the 2008 election. His album that year, The Recession, addressed trying economic times and featured the rousing single "My President": "My president is black, my Lambo's blue/And I'll be goddamned if my rims ain't too."

But it was often unclear where his heart lay, and if he was about something bigger than himself. A crack dealer by age eleven, he emerged in mid-Aughts Atlanta amid a beef with another breakout local MC, Gucci Mane, over a song they did together called "Icy." After Jeezy offered a $10,000 bounty for Gucci's diamond pendant, the latter had his home broken into by a rapper named Pookie Loc -- who was on the verge of signing with Jeezy's label -- and three other men. Gucci killed Pookie Loc during the break-in, and a judge found it to be self-defense.

Further, Jeezy, a.k.a. the "Snowman," was closely allied with a vast drug syndicate known as the Black Mafia Family, though unlike its ringleaders, he avoided indictment following a DEA investigation. Jeezy may have talked about funneling money back into the black community by "making it rain" at Atlanta strip clubs, but until this summer you would have had to squint to recognize him as a true populist.

That changed when he found himself in St. Louis on August 12, on tour with rapper Wiz Khalifa. Brown had been killed three days earlier. "That was the worst show in the tour, because you could tell people was on edge," says Jeezy. "Should they enjoy the show, or should they protest?" Following the performance he traveled twenty minutes east, from the Verizon Wireless Amphitheater to Ferguson, to join the protests on West Florissant Avenue. This led to the now iconic Instagram photo of Jeezy standing in front of the burned-down QuikTrip gas station.

I had to see it for myself!! The answer is not tearing down our own neighborhoods and communities, the answer is goin to the source of the problem in numbers. So many numbers that they know they don't have a chance. We want justice not chaos!! #ferguson #st.louis #saveourchildren #justiceformichaelbrown

Preaching both solidarity and calm, he asked protesters not to tear down their community, but rather to amass in support of a greater cause. "So many numbers that they know they don't have a chance," he wrote beneath the photo. "We want justice not chaos!!"