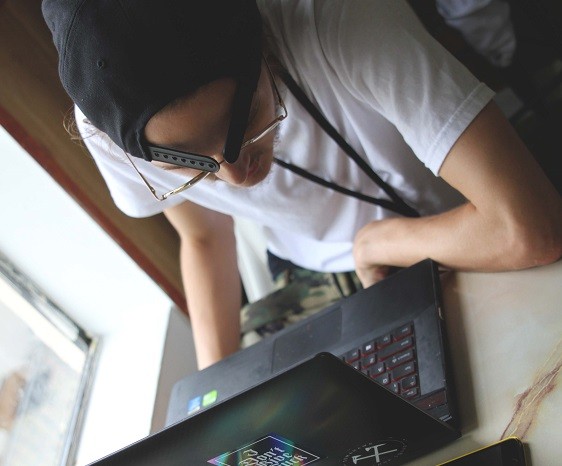 The only thing Beau Thigpen really needs in order to create is a laptop.

"I can make music on any machine if I can figure out how to use it," the Georgia-based DJ better known as Helix says.

That versatility is critical -- especially now. Although his latest release is from his alter ego, DJ Vague, he has been touring as Helix, owing to a robbery at his home just outside of Atlanta. He lost nearly all of his gear.

"I had a big gear setup for playing live [as DJ Vague], but my house got broken into and it got stolen, and I just never bought more midi gear," he explains. "So no live set for now."

Despite that huge hole in his setup, Thigpen continues to move forward with his tour. As Helix, the DJ is able to maintain flexibility within the set to work with his remaining gear and build beats within its perimeters. He says his standard setup really only has one mainstay.

Thigpen arrived on the scene in 2013, when his breakout release "Drum Track" caught the attention of Alex Sushon, a.k.a. Bok Bok, founder of the UK-based EDM label Night Slugs. Helix was chosen to be included in the group's ongoing series, Club Constructions, which Night Slugs describes as "a series of releases built for and dedicated to the club dance floor." While he has been criticized for claiming that America does techno better than the UK, he backs up his argument very simply.

"Because we made it," he says. "It's not that I don't love Surgeon, Basic Channel, LFO, et cetera, but there's just cooler, older techno shit from Detroit, LA, Dallas, Atlanta and other places in the U.S." Considering Thigpen has been heavily influenced by the likes of minimal techno artists such as Detroit's Rob Hood and Jeff Mills of Underground Resistance -- while also holding his own and rolling deep in the London Grime scene -- the sentiment makes sense.

Not one to rest on his laurels, Thigpen launched his DJ Vague project in January 2014 with the release of "Porsche Trax 3" on the Australian label Templar Sound. He generated enough attention to launch a brief North American tour.

"[St. Louis] is actually the last stop on a little mini-tour," he explains. "Later in February I'll be heading back to California for a show in LA with Girl Unit and MikeQ , and a show in San Francisco with myself as Helix and DJ Vague."

Since June 2013, a monthly electronic series called LIFTED has made St. Louis stand out to touring acts among the other so-called flyover cities. LIFTED founders Michael Bishop and David Huber have been working together to establish what they call "a rhythm and voice for our scene that is both pushing the boundaries of what people are comfortable with hearing and making our scene noticed by the rest of the world."

LIFTED, which found its home in the basement of Cherokee Street's Blank Space for the bulk of its existence, will host Helix this Saturday at a new location: downtown's 333 Beaumont. It's a special-events venue which will be converted into a club to fit the format of what a typical Helix show would entail.

"It's almost all been clubs, except for the spot I played in LA this January -- that was more of a lounge-type environment," Thigpen says. "There were just hella couches. Lots of seating, chair heaven."

Whatever the specifics, the up-and-coming DJ clearly has the ability to move a crowd. Thigpen doesn't feel the need to cling to any particular subgenre or label -- or moniker, for that matter. He has only one goal for his music.

"I'm just trying to play a set that you can't get from any other DJ," he says.