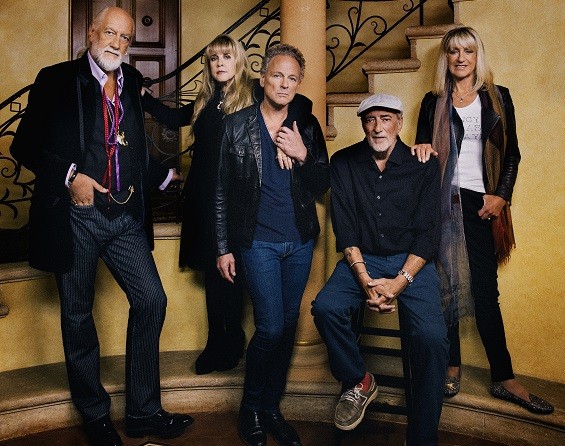 Over the course of the 38 years since the release of Fleetwood Mac's masterpiece, 1977's Rumours, the group's members have come and gone for a variety of reasons -- madness, romantic turmoil and creative tension chief among them. All the while, the rhythm section -- drummer Mick Fleetwood and bassist John McVie -- has stuck it out.

The band is currently in the middle of a U.S. tour, appropriately titled On with the Show. Last year singer/keyboardist Christine McVie, former wife of the group's bassist, returned to the fold, finally re-creating the Fleetwood Mac from the height of its popularity between 1975 and 1987. There were reunions in the '90s, and even an official breakup from 1995 to 1997, but the band could never stay together long enough to create a new album.

"Not in a million years would we have ever thought, including Christine herself, that she would have ever been standing up there to my right, onstage, playing in this band again," Fleetwood admits. "It's a mythological situation that we have right now that is unfolding as we speak. The fact that we're even talking about making inroads to making new music with the absolute lineup of all five of us, alive and well -- with a few battle scars here and there -- is outrageously unique."

That's right, new music. Fleetwood claims he and his long-time partner in the rhythm section -- as well as guitarist/vocalist Lindsey Buckingham -- have been writing and recording fresh material for the past four years now. "Lindsey has a really great stash of stuff," the drummer says of Buckingham, who entered the band in 1974 and quit in '87.

Some of these unreleased songs have made the occasional setlist during recent tours, but there has not been a full-length Fleetwood Mac studio effort since 2003's Say You Will. That was the first album since 1970's Kiln House that did not feature any writing by Christine McVie, who retired from the band in '98. Now back at the keyboard, McVie has contributed new music and is co-writing with Buckingham.

"Lindsey purposely didn't finish off several ideas and very much half-formed pieces of music, and they worked on them together, with great results," Fleetwood offers.

So Fleetwood Mac not only has fresh material by the guys in the band, but by McVie, too. He does not mention Stevie Nicks, who has been a steady member since the group reformed in 1997. Nicks wrote music and lyrics for the last album and took over the live performance of McVie's vocal parts during her absence. Listening to Fleetwood, it sounds as if a new collection of songs is not far off.

"I very much hope that at some point in our busy schedule that this cauldron, if you like, of unfinished material will come to its conclusion and become part of what I hope is something that will be put out certainly within the next year or thereabouts," he says.

A new full-length album from the classic lineup -- much like another tour starring Fleetwood, both McVies, Buckingham and Nicks -- seemed impossible, even a couple of years ago. For the past decade, Fleetwood Mac had become a band touring on greatest hits while offering occasional obscure treats for the hardcore fans. And it seemed reissues were probably the only upcoming projects for Mick and company.

Jump to comments
« Daniel Higgs, Form a Log and Others…  |  Cara Louise Band's Live at the Demo… »