The Best Concerts in St. Louis From March 30 to April 5 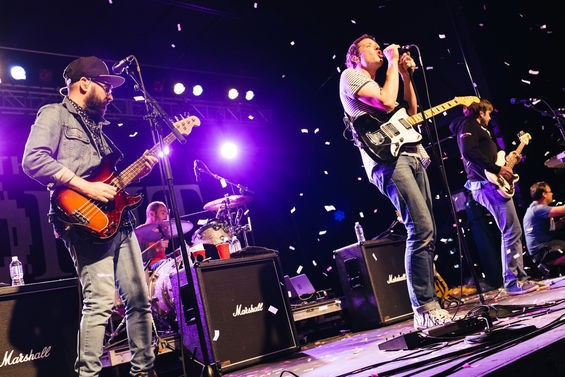 SXSW ended roughly one week ago, but St. Louis still enjoys the side effects from all those bands being out and about nationwide. March has been the busiest month for music in recent memory, and April shows no signs of slowing down. Hip-hop collective Turquoise Jeep kicks off the month ahead with a stacked bill at the Firebird -- arrive on time for Superfun Yeah Yeah Rocketship, who just debuted an absurd video for its equally absurd song The Undertaker Joins The Avengers. Are you a fan of Radiolab on NPR? If so, chances are you've heard On Fillmore's music laying down ambient beds behind hosts Jad Abumrad and Robert Krulwich. The experimental jazz duo of bassist Darin Gray and drummer Glenn Kotche will perform in St. Louis for the first time in over a decade this Saturday.

Yeesh w/ Antithought, Blight Future, LifeWithout Monday, March 30 Foam Coffee & Beer 10 p.m. | free By Joseph Hess Shoegaze has always been a tongue-in-cheek subset of indie rock. After all, gazing at one's shoes out of boredom doesn't exactly paint a positive picture, but the genre has always been about the slow burn rather than instant gratification. Chicago's Yeesh takes a raw approach, managing to elicit the same dreamy vibes through its static-drenched howl of punk songs. The band applies a glossy sheen, tricking the naked ear into thinking these might be pop songs. Luckily, the rough edges keep Yeesh from sounding too clean or straight-forward. Check out the band's latest, No Problem, released just last week through Already Dead Tapes.

Supersuckers w/ Carriage House Tuesday, March 31 Off Broadway 9 p.m. | $15 By Roy Kasten What the Supersuckers lack in subtlety and originality it makes up for in testosterone and comedic timing. Only its biker-wannabe following took the "Greatest Rock & Roll Band in the World" marketing seriously, but the band's highly head-bang-able and equally unlikely cult hits for Sub Pop -- "Creepy Jackalope Eye," "On the Couch," "Pretty Fucked Up" (as in "she used to be pretty, but now she's...you know what") -- still rock harder and come off less dated than most of the band's grunge-era peers. With the years, the group has added more and more country to its leather-and-shades attitude, and absurd as it sounds, the fusion of metal and twang sticks.

Turquoise Jeep w/ DJ Billy Brown, Superfun Yeah Yeah Rocketship Wednesday, April 1 The Firebird 8:30 p.m. | $12-$15 By Tara Mahadevan From the RFT Music archives: Turquoise Jeep is a record label known for its hilariously satirical YouTube videos, including its 2010 single "Lemme Smang It," which popularized the label. Signed artists include Flynt Flossy, Pretty Raheem, Slick Mahony, Tummiscratch, Whatchyamacallit and Yung Humma. If you want to laugh for most of the night while concurrently busting some moves (these dudes are some seriously great dancers), then don't miss Turquoise Jeep with DJ Billy Brown.

Shovels & Rope Thursday, April 2 The Ready Room 8 p.m. | $18-$20 By Nicholas Pell From 10 Country Artists You Should Be Listening To: They're a married two-piece band, but unlike the White Stripes, they're not the worst thing to happen to music in the last twenty years. Country, folk and blues all blend in to catchy tunes you'll be spinning over and over again.