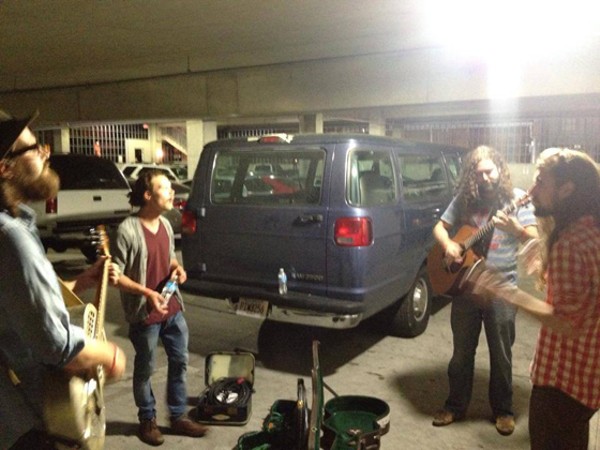 Around 8 a.m. on Saturday, June 20, Colin Dean stepped outside of the Crowne Plaza hotel in Clayton. In addition to playing drums in the Atlanta-based rock band Radio Birds, Dean serves as its unofficial mechanic, and on this particular morning he'd planned to look at the van in which he and his bandmates had been living for the last month. On the drive from Bloomington, Indiana, to St. Louis the day before, they had noticed a slight tremble in the steering wheel. Dean figured he would address the problem before it turned into something more serious.

Except that when he stepped into the parking lot of the hotel where they had left the van the night before, it was nowhere to be seen.

"We initially called [the police] and were just trying to get somebody out to the scene, but they basically told us it's a stolen vehicle -- its already gone. So there was really nothing they were going to do," says Justin Keller, who sings in the band. "In this situation, the van was worth probably $5,000, so that's one thing, but we had $25,000 to $30,000 worth of stuff in the back."

That afternoon, Keller and his bandmates took a plane back to Georgia. Soon after they landed, one of them received a call from St. Louis Police. They had found a 1997 Dodge 3500 Ram filled with amps and music gear in Florissant. It was their van.

So at 4 a.m. Monday, Keller and Dean hit the road again. The plan was to pick up the van, unload all the equipment into a trailer attached to their car, and drop the van off at a shop. When they finally made it to the tow yard, they found the vehicle with a popped lock, several dents, a busted tire and a broken suspension.

"We made it about three blocks away from the tow lot before we realized that the van was undrivable," Keller says. "I think that is what saved us really -- that whatever happened to the suspension, it was undrivable, and whoever was in it didn't really want to get caught with a broken-down vehicle." 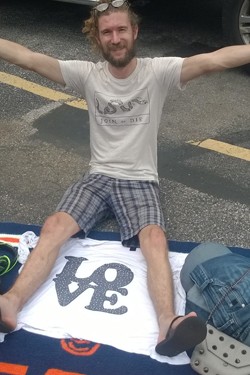 Although many of their bags and laptops were gone, all of the music gear was untouched. The thieves even left behind some personal effects of their own.

"When we got to the van it was definitely ransacked, but there was a ton of stuff that wasn't ours as well," Keller says. "There was clothing and a purse and a bunch of weird stuff, like a tool kit. I think that whoever stole it had hit some other cars before they took ours."

In fact, Radio Birds is just one of three touring bands whose vehicle was broken into this past weekend.

The other two groups, Denver's Of Feather and Bone and Dearborn, Michigan's Hollow Earth, have been touring together since June 17. They were parked side-by-side outside the City Museum when their vehicles were hit. According to Hollow Earth's guitarist, Mike Moynihan, the incident took place just before 5 p.m. on Sunday.

"We've been [to the City Museum] probably three or four times before and never had any problems," Moynihan says. "This time we figured, 'Hey it's a Sunday, we don't have to pay to go into a lot, we can just park on the street, we'll be fine, it's the middle of the day.'"

The four members of Hollow Earth parked around 2:30 p.m. and explored the museum on their own for a couple of hours. When Of Feather and Bone arrived around 4:30 p.m., Moynihan met them outside and found the van as he had left it.

"At 4:45 we walked inside, used the bathroom, and showed [the members of Of Feather and Bone] around a little bit, as much as you can show somebody in five to ten minutes at the City Museum," Moynihan says. "Then on our way back out, we get to the van, and I see the lock is popped out of the door. The guy who sings for our band, his girlfriend was with him, and they were still in the museum. And I said to them, 'Hey you guys need to get out here; the van got broken into,' and he just said, 'That's not funny,' and I was like, 'Nope, not a joke."

The two vans had only been left unattended for ten to fifteen minutes. The thieves made off with bags and personal effects from both bands, including cash, laptops and clothes. There was even a bite missing from a muffin that a friend had given the members of Hollow Earth the day before in Milwaukee.

"It sucks because they're going to open up my bag and be like, 'OK, well we have some guy's passport and a dirty Weird Al shirt, like cool.' And they're going to throw it away," Moynihan says. "That's what sucks the most, knowing that all this shit that we had, all of our clean clothes, socks and underwear, are just gone. It's not like they're going to get any use out of it. They're just throwing it away."

Last weekend's incidents are just the latest in a long line of similar crimes. Over the past year, St. Louis has become notoriously dangerous for touring musicians driving vans with out-of-state plates. In November of last year, the Riverfront Times ran a story about the issue. Between May and November, at least twelve bands had their vehicles broken into while passing through the Gateway City.

The St. Louis Metropolitan Police Department did not respond to repeated requests for comment via email and phone, but according to Mike Cracchiolo, who owns the Firebird and the Ready Room and works closely with touring musicians, this weekend's thefts mark the end of a sharp decrease in such crimes.

"Obviously there was a larger trend at play before," Cracchiolo says. "There was a wave of these incidents that the police and the mayor's office and all the various venues kind of came together and helped to solve. But unfortunately one or two isolated incidents happen and you have to wonder if it's going to happen all over again." 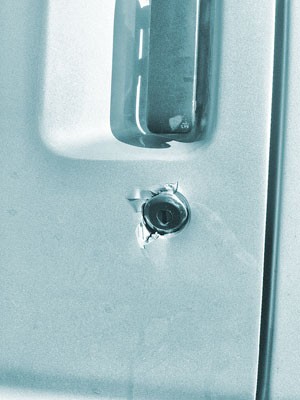 Like many club owners, Cracchiolo has gone to great lengths to prevent theft on his property. He has worked to streamline communication with neighboring venues as to help monitor suspicious behavior in the area. He has reworked artist parking and installed lockers in the Firebird, so that musicians can bring all of their valuables inside.

Perhaps most importantly, he is vigilant about warning the bands of this ongoing problem so that they can act with caution. While all of these measures have made the Firebird itself fairly safe, Cracchiolo says there is little he can do to protect artists when they are not at the venue.

Coincidentally, all three of the artists whose vans were broken into last weekend were in town to perform at the Firebird.

"We really make a strong effort to impress upon the bands how serious this issue is and to be as accommodating as possible, and find places to put their stuff while they're here," Cracchiolo says. "We tell them what has gone on, but at the end of the day, bands don't expect to get hit in broad daylight. They don't expect to get hit at the hotel, and If they go somewhere and get robbed before they get to the venue, then they don't have the benefit of hearing that speech."

Cracchiolo says that these incidents can take place almost anywhere, and have occurred at several businesses that he patronizes himself. In fact, the Firebird has a standing discount deal with the Crowne Plaza Hotel, and Cracchiolo regularly recommends the hotel to artists, in large part because of the relative safety of its parking lot.

This latest wave of thefts has left Cracchiolo feeling frustrated and angry. He has heard from booking agents that some touring musicians have requested to be routed around St. Louis, and he is afraid that St. Louis is developing a bad reputation.

"St. Louis isn't the only place where this happens," Cracchiolo says. "If you follow the issue on a national scale, you'll see that it happens in San Francisco all the time, it happens in Chicago pretty constantly. The difference is that nobody is going to skip those markets. You can't really do a full U.S. tour and not play those markets, because they're major markets. St. Louis is not. It's something where you can maybe make that decision and say, 'We can't avoid San Francisco, but maybe we can avoid St. Louis this time around.'"

Radio Birds is scheduled to play at Off Broadway on July 30. Keller says the band has no interest in canceling the show.

"This doesn't only happen in St. Louis by any means," he says. "Seeing as it has happened like nine times very recently is a little concerning and we'll definitely take precautions, but I don't think we'll take any more precautions than we would anywhere else from here on out."

On the other hand, Moynihan says that on Hollow Earth's next tour, the band will likely be steering past St. Louis.

"It has gotten to the point now where we're like, 'Fuck.' [St. Louis] is a stop that makes sense for getting somewhere else, but the shows are never good, everybody gets their gear stolen. So why are we fucking coming here?" Moynihan says. "And then we remember the City Museum."

Jump to comments
« Gay Men Will Get a Bar of Their Own…  |  Toymaker's Self-Titled New Album: R… »