One Year After Michael Brown's Death, a Protest Movement Is No Longer Afraid 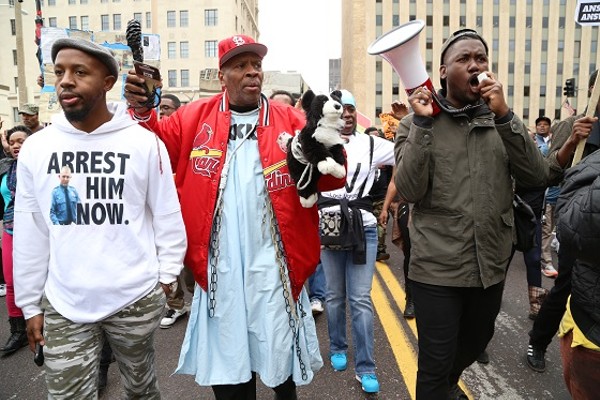 [Editor's note: Tef Poe is a rapper/activist based in St. Louis who has spent much of the last year on the frontlines of the protest movement in Ferguson. His activism has taken him to Geneva, Switzerland, to address the United Nations with the family of Michael Brown; he has penned pieces for publications including Time and the Huffington Post; and he's been interviewed by CNN, MSNBC, BBC and BET. As a regular Riverfront Times contributor, Tef was honored in 2014 with a Salute to Excellence Award by the National Association of Black Journalists. His most recent musical effort, War Machine III, was released by Delmar Records in July and is available on iTunes.]

And here's another truth: Today in America black people are not liberated. We are not free, and Ferguson shows us that we must fight like hell to reject any notion that equality has entered into our lives through Barack Obama and his stagnant calls for hope and change.

A year after Michael's Brown's death and the protests that followed, my perspective has shifted. I can no longer force myself to chant the words "Hands Up; Don't Shoot." We chanted this phrase assuming that white supremacy actually gave a damn about our humanity. We were ignorant to the ways of the world.

Now things are different. Our youthful exhibition of peaceful protest has changed the dynamic. They fear us -- and our growing lack of fear of them.

The violence in our city a year after the Ferguson Uprising has snowballed, centered on the devaluing of African American life. As the murder rate climbs, it is black people who are terrorized. When the rapists and the murderers are released from prison, they come home to north St. Louis and live in the same apartment buildings as we do. Nothing in this world can describe the psychiatric trauma attached to being born in the ghetto.

After Ferguson, some things have indeed changed for the better. Now that the community has openly challenged the racism of every police department in the region, a slight paradigm shift has occurred. A very small contingent of us has decided we believe in ourselves.

Black people in St. Louis have often been treated as if we can be quarantined, contained to very limited spaces. The history of this city is deeply rooted in the subjugation of African Americans. Blacks in Missouri were essentially reduced to staying in our place and understanding that we must never step out of line when dealing with a white person. Michael Brown Jr. died because he dared to challenge that practice and refused to stay in line when approached by a white male authority figure with a loaded gun and a heavy trigger finger. Because his story is not unique, his death resonated with thousands.

I remember seeing the multitudes of people from neighborhoods that were once rivals standing in solidarity for Brown on West Florissant as we gathered in the name of resistance. The world paused momentarily while we stood there and steadfastly endured the treacherous heat of the sun upon our backs last August.

This is what happens when the black community no longer fears the power of its ordained police force. Thousands of black people nationwide are demanding inclusion into a system that was never designed to include us. In this generation, the fight our ancestors embarked upon was rekindled and sparked by St. Louis-area youth and their allies.

The movement, as many like to call it, was reborn in Ferguson after being incubated in St. Louis for many years. Then Freddie Gray's untimely murder caused the city of Baltimore to go up in flames as cries for justice filled the East Coast and beyond.

Many would say this is a story about how we as a community have continually suffered defeat, but I beg to differ. See, many people watching from afar did not realize how personally black people in St. Louis took Trayvon Martin's murder. Mike Brown's death triggered a collective voice of people, saying, "This is wrong, and we will not take it."

The sleeping giant has now risen, and the result is a movement for black lives that has spread across the world. Your system does not have to embrace us; we are simply asking to be released from the confines of your jaded perspectives. We do not want your food stamps or supplemental handouts. Hillary Clinton and the multitudes of white presidential candidates do not represent us -- and we do not seek representation within this government if it is only for symbolic value. Claire McCaskill suggested on national TV that young black leaders like myself should run for office. We say very candidly to people like Senator McCaskill that to work and fraternize with devils is to become one.

I stood at the Ferguson Police Department on August 10 and listened with my own ears to local authority figures attach the issues of police brutality to the issues of the ballot. Racism is evil, and I reject any notion that would suggest we are capable of voting it into oblivion. When the slave ships arrived with human cargo from Africa onboard centuries ago, the discussion of freedom was also connected to "voting rights." But we have attempted to vote ourselves off the plantation for centuries years now, and it still has not worked.

In fact, Ferguson did not occur under the order of a white president. Barack Obama, our beloved first black president, is also the first president in my adult lifetime to sit on his hands as a potential race war becomes the underlying narrative of America today.

Jump to comments
« Shooting a Scene: Art Show to Displ…  |  Fifteen Years Into His Career, Rock… »

Speaking of Longform, The Poe Report