The Best Concerts in St. Louis This Week, September 21 to 27 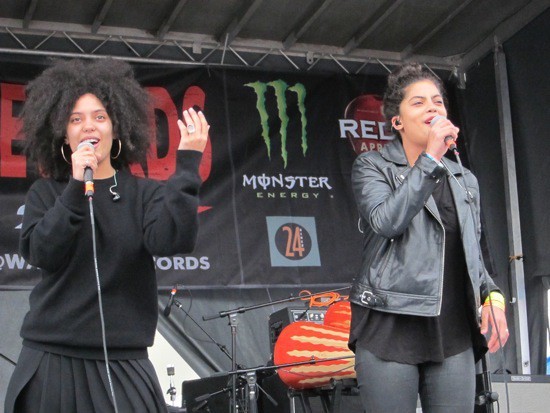 Most Fugazi fans, especially ones who caught on post-breakup, lament the fact that they might not ever see a reunion. While other bands in the outposts of punk have reunited (Refused, Drive Like Jehu), Ian Mackaye and company are steadfast in never reliving the glory days. Regardless, the Potomac Accord takes on lofty expectations this Sunday with their Fugazi set for An Under Cover Weekend, three days of cover sets by some of St. Louis' finest. If you love tribute shows and can't stave the hunger until then, check out Off Broadway on Wednesday for Work Your Way Out: Celebrating 25 years of Ani DeFranco.

Mussy Cluves w/ Stone Hen
Foam Coffee & Beer
8 p.m. | Free
By Joseph Hess
Depending on your taste, jam bands are either A) disgusting or B) delicious. But the more discerning palette might strive for the kind of nuance that Mussy Cluves provides. This is psych-rock on actual acid that moves at light-speed to its destination, despite lacking any real direction. The band cranks out a sound that feels more informed by the Melvins rather than the Dead, which mostly works to its benefit. The fuzz here is so thick that it suffocates, and by all means could be too much for purists of the genre. But for a style of music that takes exploration as a given, this approach seems apt, especially since life in St. Louis in 2015 is anything but rainbows and totally good vibes, man. This all local psych-out is followed up by a late night hardcore gig with Allergy from Gainesville, Florida and a stacked local lineup of Nos Bos, Ruz and newcomers the Bubbleheads.

Craow w/ Soft Target, Veil, Ghost Ice, DJ Swan Gone
Blank Space
9 p.m. | $7
By Joseph Hess
Providence, Rhode Island-native Sean Halpin records and performs as Craow, but what that name means differs depending on the time and space in which it is used. From harsh walls of static to stoic post-punk jams, Halpin's work spans several styles but always comes with an injection of doom and gloom. He has a long list of contributors who help shape Craow's many forms both live and on record. The latest release, a reissue of 2011's Preferable Execution By Firing Squad, was recorded over two months while Halpin's jaw was wired completely shut. Consider the kind of brainwaves leaked out from an already luminous and prolific musician, then take away the ability to speak. His live show feels like a full-on psychic assault, but fans of industrial, metal and noise will learn to love the pain.

Work Your Way Out: Celebrating 25 years of Ani DiFranco w/ Suzie Cue, the Bottoms Up Blues Gang, Genevieve and more
Off Broadway
8 p.m. | $10
By Christian Schaeffer
Here’s a truth about the St. Louis music scene that is all but irrefutable: We love tribute nights. Love them, revere them, buy tickets en masse to them. Be it arena-worthy sets recreating the hits of Zeppelin and Floyd or yearly tributes to the likes of the Band, Ween or Guided by Voices, local musicians and showgoers can’t seem to get enough. You will notice, though, the preponderance of white male artists being feted and a near-total dearth of sets honoring female artists. Local singer-songwriter Suzie Cue has struck a blow against the musical patriarchy with Work Your Way Out, a night of songs written by the righteous babe herself, Ani DiFranco. It has been 25 years since DiFranco’s self-titled debut was released, and her mix of spoken-word poetry, folk music and activism is certainly worth a tribute.

Ditto for Ibeyi, Yoruba for twins, the sisters Lisa-Kaindé Diaz and Naomi Diaz, who were more than a highlight of my SXSW 2015. They were as eloquent in their French and Afro-Cuban song poems, looped and chorded and thumped on a cajon with a freshness that restores hope and faith and, to quote John Trudell again, intelligence to this dizzying, mind and liver-numbing beast that began in Austin 28 years ago.

An Under Cover Weekend 9: Sept. 25-27
The Firebird
8:30 p.m. | $10 each night, $22 for all three shows
By Daniel Hill
An Under Cover Weekend has upped the ante to preposterous heights this year. In addition to its organizers' expanding of the event into a third night, the bands involved are clearly getting increasingly ambitious with their choices of tributes — blame the spirit of friendly competition that always seems to arise from this affair. The Potomac Accord as Fugazi? Rusty Nail as Black Sabbath? The Langaleers as Creedence Clearwater Revival? These are legendary bands with wholly unique sounds — but if anyone is equal to such a task, it is the abundantly talented St. Louis music community. Each year An Under Cover Weekend packs the Firebird and creates lasting memories for all in attendance. Expect no different this time around.

Stillwater w/ Peck of Dirt, Free Dirt
Schlafly Tap Room
9 p.m. | Free
By Christian Schaeffer
One of the great things about St. Louis music is that many of our beloved older bands don’t always stay broken up forever. Witness the reunions and rejuvenations of the last twelve months — bands such as the Three Merry Widows and Nadine have played shows after long absences, to say nothing of the second-coming fervor that attended the Urge’s reboot. Go ahead and add Stillwater to that list of born-again rock bands. After two records and some solid regional recognition, the trio hung it up in the late 1990s, though its guitar-heavy rumble became transmogrified in Chris Grabau’s next project, the long-running and amorphous Magnolia Summer. Grabau will reunite with bassist John O’Brien and Michael Rose for this free show, though time will tell if this appearance is more than a one-off among friends.

D.R.I. w/ Grand Inquisitor, Path of Might, Absala, Guy Morgan
Fubar
7 p.m. | $15-$18
By Daniel Hill
The legendary Dirty Rotten Imbeciles, better known simply as D.R.I., have finally returned. That's not to say the band that created the crossover sound hasn't repeatedly played St. Louis in the last few years — it has, certainly. But it wasn't until its most recent set in September of last year that the group really sounded right. Credit new drummer Brandon Karns, who handles the group's light-speed tempos with ease. Singer Kurt Brecht claims that Karns' inclusion has been fruitful enough to yield new music, too, which is remarkable considering D.R.I.'s last record was released in 1995. The new songs the group performed at that show displayed great promise; here's hoping something actually becomes of them.

Note: Though we wish we could, we can't feature every great show happening in town in just one post. Look for plenty more recommendations this Friday in our weekend shows post, peruse the St. Louis concert calendar for more ideas and let everyone know what else you're looking forward to seeing this week in the comments below. To be considered for coverage in RFT Music, submit show info online or drop us a line anytime.

Remembering STLPunk.com — How to View the Site Today and Find Your Old Profile Page
"Where Did My Dick Go?" The Gathering of the Juggalos' Best Overheard Quotations
The Ten Best Dive Bars in St. Louis
The 15 Most Ridiculous Band Promo Photos Ever