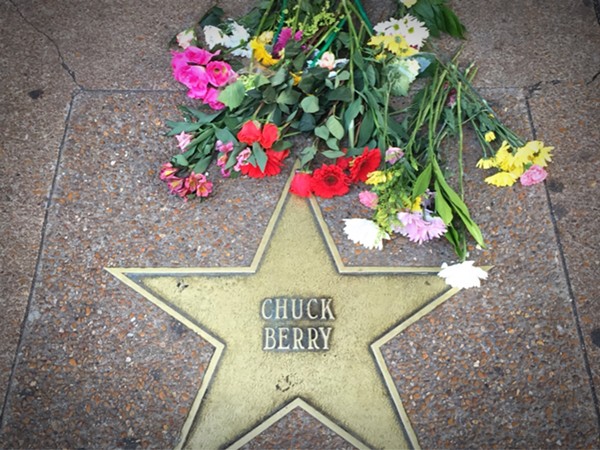 Yes, I know. I'm a terrible person. But hear me out.

I love Chuck Berry. I love Chuck Berry fully and without reservation. But I can only say that since he’s been gone. Berry died a year ago this weekend and I’ve noticed that I’ve spoken differently about him ever since he passed.

Back when he was still alive, my love for him always came with an asterisk attached. I was always careful to say that I liked his music or that I respected his work, but it was difficult to just come out with a simple “I love Chuck Berry” because, well, I didn’t. I didn't really like Chuck Berry the man much at all.

This is a uniquely St. Louis problem, I think. Because around here, if you said those words it could easily mean that you meant the actual individual, not just his music. One of the many interesting things about living in St. Louis is that you were always in close proximity to the Father of Rock and Roll.

Not only did he shape so much of our local culture, but the dude was just around a lot. He played shows once a month in the basement of Blueberry Hill for years. Because he had a huge love for his home town, Berry stayed in the area and always spoke about it lovingly to the international press. Many locals knew him or lived near him or had personal interactions with him. But that meant that we also kept a close eye on his dark side, too.

We all knew that he had a long history of doing bad things. And because we were St. Louis residents, we might’ve even known somebody who went to his restaurant and was filmed in the restroom.

As such, I’ve had deeply ambivalent feelings about Chuck Berry for my entire life. Nobody else on the planet had ever given so much to the two things that I love the most: rock and roll and St. Louis. But at the same time he disappointed me deeply.

In the past I've explored how a musician’s personal life impacts my listening experience, even if it shouldn’t. And though knowing too much might seem to stain my experience a bit, it still doesn’t really stop me from enjoying their work. Like, Morrissey is a piece of shit but I still dig the Smiths. These are two separate thoughts in my head, but they live right next door to each other.

Plenty of people think that things like this shouldn’t cause me mental conflict at all: that some artists are just jerks and you have to suck it up or not care about these things. I mostly agree with that idea but I still have deep thoughts on these subjects.

It bums me out that Berry will have all of this weight dragging down his reputation forever. Without it he could’ve been known as nothing but a hero. I think that Chuck Berry did more for race relations in the United States than many civil rights leaders, even. (He didn’t necessarily mean to help to heal our racial wounds, but that was still the result.) Berry brought people together and that was a very important first step. Rock and roll itself was born from the marriage of traditionally black music (blues) and traditionally white music (folk). And this one magical little cocktail sparked all types of communication, understanding and connection.

All of this was on my mind last year when I attended his funeral. I wasn’t sure how I was going to handle coverage of the event. I think that when writing about Chuck Berry’s work that it’s totally acceptable to leave out the parts where he’s a bad man. But if you’re writing about Chuck Berry’s life, to ignore these aspects makes your piece inaccurate at best. I read countless articles after his death that did not mention his abusiveness or criminal behavior. I know that these journalists just wanted to celebrate their hero, but to pretend that your hero has no shortcomings or failures is ridiculous. It reminds me of those Trump supporters where nothing he says or does ever crosses the line for them.

I knew that nobody on the stage at his funeral would bring up the dead guy’s violent or pervy habits during their eulogies, but outside the building it was another story. I was not surprised when a few protesters showed up with signs. They stood quietly and let their signs do all of the talking. One read, simply: “Your idol is someone else’s abuser.” Members of the public hissed at them but they stayed calm and firm, ready to explain their position.

Because they showed up, I wrote about them. If they hadn’t been there, I would’ve had no reason to dig into that part of his past. I didn’t particularly want to cover that part of his life — that’s not what the funeral was about — but I wasn’t going to ignore it, either. Many people thought that the protesters showing up and my mentioning them was disrespectful, but just because someone is dead doesn’t mean that I’m going to stop talking trash on them if I think it’s justified.

But after the funeral, after the stories were written, after all of the gatherings ended, I found myself talking sweeter on Chuck Berry than I ever had while he was alive. It took a while to realize what had changed — he wasn’t around to get in the way of me loving him anymore. I could enjoy his music and be impressed with his significance without feeling like I also had to step around his troubled past. In addition, I didn’t have to worry about making sure that he wasn’t getting any of my money. (That’s where I draw the line with known shitheads — even if I like them I will not pay them.) Suddenly, all of my personal confusion about Berry dropped away. My thoughts about him were finally free. I didn't need to hold that grudge anymore.

When Berry was honored during the Rock and Roll Hall of Fame induction ceremony last year, his voice played out loudly over the crowd while footage of his career rolled on the screen.

It was in that moment that I realized that I’d accidentally made Chuck Berry proud. He didn't want us to skip over the terrible things that he had done in his life. Berry didn’t like any bullshit. Even if it made him look bad, he still wanted to keep it real.

So now nobody gets in the way of me enjoying Chuck Berry — not even Chuck Berry.