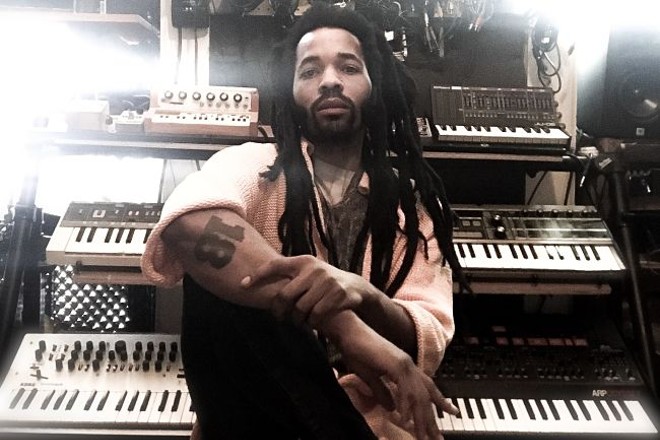 “Stay woke, stay ready,” as the saying goes. That dictum has been put into practice for years by civil rights organizers, but as the intertwined movements of police reform and Black Lives Matter have hit a critical mass over the past month, the phrase rings ever more true.

Stan Chisholm has his own twist on the phrase: “Stay bent, stay busy.” It describes both his posture — leaning over turntables, or racks of synthesizers, or paint-splattered canvas — and his seemingly endless drive to create. As the force behind the pseudonymous 18andCounting, Chisholm creates varying strands of visual and musical art: Sometimes that means DJ sets at local bars, and sometimes that means leading a band comprising of drums, violin and didgeridoo, as Chisholm did at 18andCounting’s memorable set at LouFest in 2017. Alongside vocalist goya_goon and fellow producer Dolor, 18andCounting also recently released a set called Strait II Tape, culled from an hours-long session recorded in January and preserved on grainy, punchy cassette.

But Chisholm, like every musician, struggled with how best to stay busy during the COVID-19 shutdown that has continued to sideline working musicians. At first, he put his house in order — literally. Years of steady gigging left his studio space in shambles, so the shutdown allowed Chisholm to put everything back together.

“Quarantine has helped that — I don’t have to have all these cables on deck to take to shows, and we’re not throwing parties at the studio for a while,” he says. “All these cables that were hanging out are now engaged. I don’t know what’s gonna happen when we do another show.”

Those regular gigs got transmuted into what he dubbed the "Midnight Special," a nightly DJ set that he livestreamed for a whopping 71 nights straight.

“I guess it was a decision made on a whim,” he says. “I just woke up one day and said, ‘Alright, I guess there’s not gonna be any shows for a while. I’m gonna stream everyday.’ I said that’s what I was gonna do.”

His first livestream set was March 22, which was supposed to be the night of former Can lead singer Damo Suzuki’s long-awaited set at Off Broadway. Chisholm was set to perform at the show. “I can’t say that I streamed because that show got cancelled, but something about the intensity that was going to take place at that show inspired me,” he says.

“I wasn’t afraid of the idea of playing continuously,” Chisholm continues, referring to his usual three or four (or more) hours-long DJ sets pre-shutdown. “Going at it in some intense manner was going to be good for everyone. I was able to show the range as well — if I’m doing it from home there is no emotional factor, aside from what we were all seeing online. It never really felt repetitive — who is in the room changes, and every day something got tweaked.”

Ever the sonic tinkerer, Chisholm made subtle changes to the format for each stream. But the depth of his record crates ensured that his sets stayed varied, and being liberated from a traditional DJ booth let him take some chances.

“But it was weird for a little bit — not having a crowd is weird,” he says. “You don’t get that with a stream — it was cool to fly at my own imagined pace, not ‘it’s Friday, everyone’s drunk!’ I've always been pretty stubborn about playing what I want to, but it was pretty nice to fly how I want to, playing my own music or deciding that I was gonna play drumless music for the next 40 minutes.”

Chisholm ended his nightly streams at the end of May but he hopes to tweak the format for future videos, perhaps focusing on modular synthesis or production. And he still lends his talents to righteous causes, performing on livestream benefits as both a DJ and a performer. Earlier this week he did a set to benefit bringing personal protective equipment (PPE) into prisons, and on Friday night he will take part in a benefit for the legal advocacy group ArchCity Defenders thrown by the Grove neighborhood venue the Monocle.

For these shorter benefit sets, Chisholm has been able to flex his activist muscles more overtly than in his DJ sets. “It’s interesting; I consider myself a writer and vocalist and a rapper before everything else; I got into rapping before everything else,” Chisholm says. “I think my angry-at-the-world voice has taken a backseat.”

Performing his lyrical content on these streams, including songs from his 2016 release The Birds at This Hour, reanimated his skills as an emcee. “I guess it was an opportunity to remind myself that lyrically I am against a lot of what is the norm, and I have this socio-political aggression that has taken a side-step to learn production,” Chisholm says.

“It’s important to show up for those folks,” Chisholm says of the organizers and beneficiaries of these recent livestreams. “It’s also important for me to maintain my corner and what I believe in activism. I have an aggressive way of doing things and a lot of it comes from going against stereotypes and going against images of who I am.”

Chisholm’s work has long been socially conscious if not overtly political or straightforwardly preachy; he favors elliptical lyrics and extended metaphors in his verses. But when asked for his perspective as a black man living and working in St. Louis if this moment feels different than the experiences in and around Ferguson after Michael Brown’s death, Chisholm sees both stasis and progress.

“Unfortunately it doesn’t feel different, but it does feel more intense,” Chisholm says of the current swell of activism. “Intensity is how you make a difference; intensity is how you get heard. People are leaning on the struggle of black people in this moment because the struggle of black people built this country. Because it is so intense, people are starting to feel like it matters to them. It’s now, but it’s also historical. Even saying something as simple as, ‘I've enjoyed the music of black people all my life; now I have to do something.’ You saw, you enjoyed, but you were not hearing me.

“Only because it’s intense now — it’s upsetting that it takes that much work," he continues. "I think now people are starting to understand that it’s not a black problem — it’s a white problem. Somehow, it’s now starting to seem like a problem for everyone. It’s not gonna be the last time we see a video — it’s already happened. It’s upsetting, but I am hoping the intensity changes things. If the law took care of George Floyd, then when is the law gonna take care of the murderers?

“Things are intense because they’ve been so fucking lopsided for over a century,” Chisholm says.