10 Names for St. Louis' Soccer Stadium That Are Better Than 'CITYPARK' 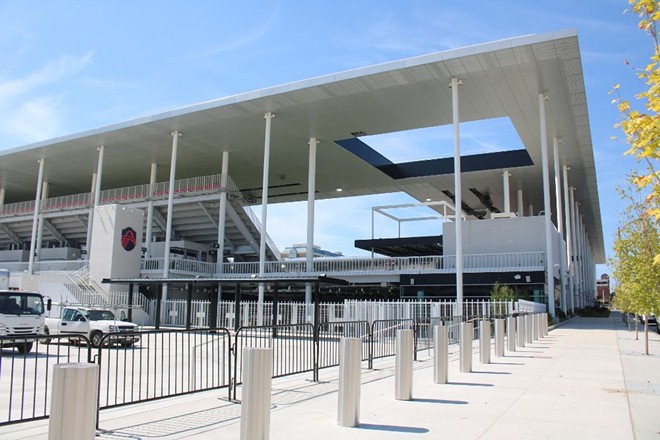 MONICA OBRADOVIC
We can definitely do better than that trash name.
St. Louis' shiny new soccer stadium hasn't even hosted its first game yet, but it's already making headlines.

Specifically, the new pride of the city made the news earlier this week due to the fact that it's been unable to operate at full power for the last two months on account of flooding and a broken electrical pipe, which together fried some of the stadium's main breakers and resulted in the place running off of a generator. Then, just yesterday, the St. Louis Business Journal reported that managed care company and alleged medicaid fraudster Centene has backed out of its 15-year naming rights deal, rendering the stadium an underwhelming "CITYPARK" for the foreseeable future in what feels eerily similar to a South Park bit.

We here at the RFT are nothing if not helpful in times of crisis, so in keeping, we thought we'd toss out a few friendly suggestions for names that are better than that mess. Let's dive in:

Big Wet Electricity Park
St. Louisans are famous for our ability to make the best of of a bad situation, so why not lean into our stadium's unique new amenities? When life gives you a stadium full of floods and electrical fires, you make Big Wet Electricity Park. The chaos of sudden power outages and flooded facilities would make for a exciting experience for fans and players alike, adding thrilling new aspects to the sport that only a stadium this wet and electric could ever provide.

99.1 Joy FM Stadium
With the way it's already running into so many problems, the new park might as well be a Joy FM driver. We'll just slap a giant, oversized sticker from the station on the side, and people will know to steer clear. Plus this way, if God really wants the park to succeed, He can go ahead and figure it out Himself.

Riverport Amphitheater-Lumiere Casino-Kiel Center Stadium
Let's be honest, the good but stubborn people of St. Louis are going to call this thing whatever the hell we want to anyway, right? Let's nip this farce in the bud.

Big Loop Trolley Vibes Park
The fact that our shining new monument to St. Louis pride is running into major problems before it has even played host to a single paying customer seems super familiar, for some reason — reminiscent of a certain local transportation farce that was taking out the sideview mirrors of cars even before it opened for business. Bonus: If we can confuse the federal government hard enough with the similar name, maybe we can shake loose some subsidies.

Medicaid Overbilling Park
Why not pay a nice tribute to our favorite local care management company before they flee the city for good? It's the friendly thing to do.

The Revenge of Mill Creek Stadium
Ever wonder why so many of St. Louis' "urban renewal initiatives" tend to have the luck of homes built on graveyards? The ghosts of tens of thousands of displaced St. Louisans will have the last word.

Stan Kroenke Stadium
Because it sucks, get it?