18 Symbols That Should Be Made "Official" in Missouri

In Missouri, legislators didn't think it was a good idea to name a dead dog as the official state canine. On Thursday, the state House defeated a bill aimed at making "Seamen," the dog that accompanied Lewis and Clark on their trip West, the official canine in our state. As the Post-Dispatch reported, legislators had their reasons: not practical (did Seamen ever actually run in Missouri?; the dog is long-dead) to political (its breed, a Newfoundland, is Canadian.)

We'll let debate continue on that matter, but in all, Missouri has 27 official state symbols, from the official American folk dance (the Square Dance) to the Late Cretaceous (the Hypsibema missouriense dinosaur.)

Here are eighteen others that should be voted upon, declared official and expounded upon in classrooms across the Show-Me State. Compiled by the RFT staff.

Official state STD: Chlamydia This news report says it all: "St. Louis ranked second-highest in the number of reported cases of gonorrhea and chlamydia per 100,000 population [in 2008], compared to other US cities and counties, a new CDC report shows."

Official State Skin Irritant: Poison Ivy The Missouri Department of Conservation has already dubbed this plant the most irritating, so why not make it official? "The old saying 'Leaves of three, leave it be' is good advice."

Sure Al Capone was from Chicago, but did you know he vacationed in Rockaway Beach, Missouri? Maybe he stayed there in part to combat Syphillis, caused by the microbe Treponema pallidum spirochete.

Official State Microbe: the Treponema pallidum spirochete To continue the STD officialdom: "Treponema pallidum is a species of spirochaete bacterium with subspecies that cause treponemal diseases such as syphilis, bejel, pinta and yaws. It is not seen on a Gram stained smear because the organism is too thin." 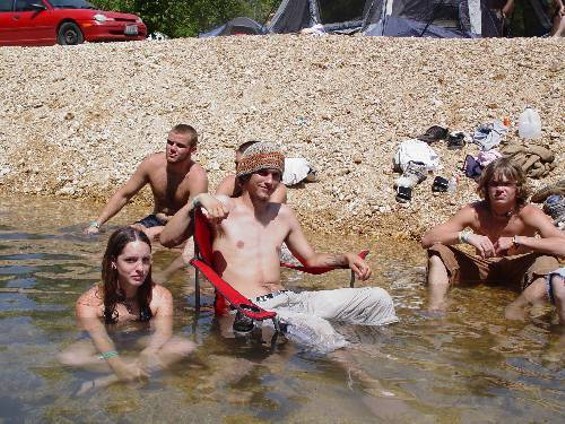 Official State Aroma: a pungent mixture of Marlboro, stale bud and b.o. Attendance at any number of outdoor concerts in Missouri -- and fuck yeah, Schwagstock -- will provide enough evidence to sway lawmakers into making this the official aroma.

Official State Breast to Bare if You're at Soulard Mardi Gras or in Party Cove and Only Brave Enough to Bare One Breast: Left Just because.

This is one of five safe-for-work images availble when one searches "Party Cove Ozarks" on Google. It's the hub for fresh water-based debauchery each summer in Missouri.

Official State Inferiority Complex: The citizens of St. Louis We're not Chicago. And that's OK. Or New York. Repeat after us, it's OK. It's OK.