After their TikToks went viral, the two grabbed a drink together 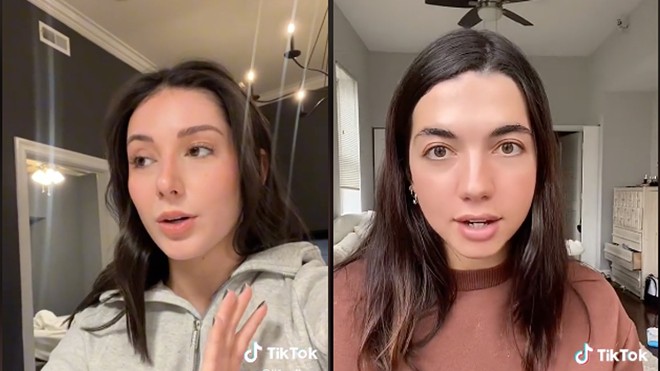 VIA TIKTOK
Liesel Julsrud (left) found out that the guy she was seeing was cheating on her after seeing a TikTok that Sophia Marren (right) made. The girls jokingly say that the cheater had a type, since they look similar.

Two St. Louis women have won viral fame for an unfortunate discovery: Finding out via TikTok that their boyfriend was cheating on them.

It all started almost a year ago, in March 2021, when Sophia Marren, 26, was headed to a date with her boyfriend. She made a TikTok where she showed her outfit and her drive to the date, then briefly showed her boyfriend in the kitchen preparing a shrimp-and-rice dinner for her.
Imagine Liesel Julsrud’s surprise when the video popped up on her For You Page — and she realized it was her boyfriend’s kitchen in Marren’s video.

For Julsrud, 25, the revelation didn’t come out of nowhere. She’d seen a text from Marren pop up on his phone one night, but he’d insisted she was a friend from the gym, and Julsrud had believed him.

When the video popped up, Julsrud dug a little deeper and found evidence that her boyfriend and Marren had been hanging out for a while.

“The way that I spiraled in that moment, I am surprised I did not commit a federal crime,” Julsrud said in a later storytime TikTok. “This just goes to show that TikTok knows everything, and you can’t hide anything from anyone anymore.”

After confronting him, the cheating boyfriend “sobbed” an apology to Julsrud, who agreed to take him back, believing that he’d stopped seeing Marren.

Fast forward to January 12, 2023. Julsrud and the guy had broken up after he moved to Tulum, Mexico, and she made a TikTok looking back on the cheating incident.

The 5-second long TikTok has the words “when you were on your fyp & came across a tikok [sic] of a girl getting ready for dinner at a guy’s house…and it was the guy you had been seeing for 5 months,” while Julsrud uses a voice filter and says, “Shut up. It is not.”

“I had honestly forgotten about that happening, but it randomly popped into my head a couple weeks ago,” Julsrud says. “I was just bringing up a memory and turning it into a joke.”

As the post was going viral, Marren says a friend sent it to her.

“Instantly, I knew it was about me because I had heard about Liesel before from another guy I used to see,” Marren says. “I did some digging and always had a speculation that maybe she saw [the cheater] in the past, before I did. Had no idea that it was DURING the time I was with him.”

Marren reached out to Julsrud to “confirm it was about me and that there was no bad blood,” Marren explains. After talking to Julsrud, Marren came forward on TikTok, stitching Julsrud’s post and said, “OK, so basically I was the other girl.”

Marren explained in a TikTok storytime that she originally met the man on Hinge, and while they dated for a few months, they were never official. “But, you know, as any girl would think if you’re seeing a guy consistently for a while, like, you guys would probably be, like, exclusive.” They were not.

As the women compared notes, the full extent of the man’s treachery became clear. Marren says now she never realized that Julsrud had caught him cheating from Marren’s TikTok — because Marren had had no idea he was using her to cheat. And after Julsrud agreed to take him back, assuming it was over with Marren, the man secretly continued to juggle both women for another few weeks.

In fact, before he left to go work in Tulum, Marren says, he stopped by her place to say good-bye. Marren cried, but the man said he had to go because his dad was taking him to the airport. She now knows that wasn’t the truth. Instead, Julsrud picked the cheater up from his dad’s to spend the night with her, and Julsrud took him to the airport in the morning.

Both Marren and Julsrud also made plans to visit the cheater in Tulum, but he started dating someone new. Julsrud says she’d already bought a plane ticket that she had to cancel.

All in all, both women have expressed relief that the cheater is out of their lives. “Liesel and I have connected, and we actually met for the first time this past Friday,” Marren says. “So in a way, a crappy situation but also nice that her and I are able to be friends and talk it out.”

Adds Julsrud: "Our ex thought we were similar enough, so we may as well be friends!"