They're at it again.

On Monday, November 17, the Baseball Writers Association of America (BBWAA) announced that Albert Pujols had won the 2008 National League Most Valuable Player Award.

The announcement was followed, of course, by a spirited round of bleating from the sports press -- who are, let us not forget, the baseball writers of America. While Pujols' margin of victory was decisive, it was by no means unanimous. So you'd figure there'd be some carping/hair-splitting/meta-analysis. 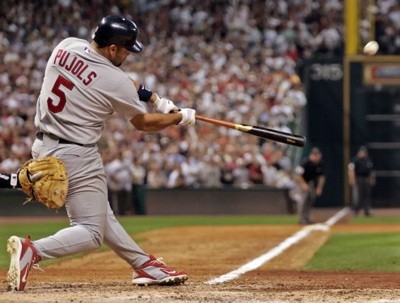 But the occasion of Pujols' second MVP honor also provided writers with the opportunity to revisit the autumn of 2006, when Pujols was edged out, 388 points to 347, by Philadelphia Phillies slugger Ryan Howard. (This year Prince Albert topped Howard 369-308.)

Now, two years later, we got:

In 2006, when Howard claimed the MVP award without the Phillies making the playoffs, Pujols - who propelled the Cardinals to the World Series title that year - said he thought a player shouldn't be MVP if his team didn't go to the post-season.

Pujols back-tracked on those comments Monday and said his words were misinterpreted.

Pujols reportedly said in 2006 that Howard did not deserve to win because the Phils did not make the playoffs. (Pujols' Cardinals did.) Pujols later apologized and said Howard deserved the award. He was asked yesterday if he had changed his mind about players whose teams fail to make the playoffs, but who win the award.

"Thanks for opening the door that was already shut," Pujols said. "I said it in 2006. That guy misunderstood my words. And what I said is the players who take their teams to the playoffs should have some consideration to win the MVP.

For some, a paramount virtue of the MVP is hoisting a team to the postseason. Back in 2006, when Howard edged Pujols for the MVP - 20 first-place votes to 12 -- the Cardinals' first baseman was quoted as wondering why the MVP didn't come from a playoff team. Though his team had more wins than Pujols', Howard's Phillies didn't make the playoffs. The Cardinals won the World Series. This year, it's Pujols whose team didn't qualify and Howard's team that won.

Pujols later apologized to Howard for the comments....

Derrick Goold, St. Louis Post-Dispatch (in a story published before the selection was announced)

Before we go any further, here's the original 2006 quote:

"I see it this way: Someone who doesn't take his team to the playoffs doesn't deserve to win the MVP."

The quote was widely disseminated in the English-language press beneath headlines like:

"Snubbed Pujols says MVP should be on playoff team"

There was something odd about it all, though. Pujols' remark was gleaned from a news conference organized by the Dominican Republic's sports ministry -- and conducted in Spanish.

Additionally, from what I knew of Albert Pujols, the implied attitude -- that of a sore loser -- didn't ring true. Pujols can be snippy with the media at times, but I'd never gotten even the slightest whiff of poor sportsmanship from the guy. In fact, Pujols always seemed to go to great lengths to not be a poor sport.

So back in '06 I went looking in the Spanish-language media in search of context. What I found was stuff like:

Under a headline that translates to "Pujols said he deserved the MVP more than Ryan Howard," Juan Mercado of El Dia wrote essentially the same thing -- that the Cardinals first baseman felt his numbers were better and that no player who failed to lead his team to the postseason should be named MVP. "Eso es lo que yo pienso, pero yo no voto," Pujols added: That's what I think, but I don't vote.

At first it hurt that he didn't win, Pujols admitted. "But I won the MVP in 2005 and said I'd trade it for a World Series ring, and that's what happened this year."

I guess there is some symmetry in all of this. Two years ago U.S. media outlets were all over the soundbite and wanted nothing to do with the bigger picture.

I guess some things never change.