Mark your calendars, cyclists/ environmentalists/ people who enjoy getting nude in public! The folks behind the 2013 World Naked Bike Ride have just announced that the annual ride is set for Saturday, July 27 in St. Louis. With favorable weather -- although, once your naked, a little rain never hurt! -- organizers expect there to be record turnouts.

"We're getting a lot bigger and a lot more mainstream," coordinator and co-founder Stephanie Co tells Daily RFT. "It's...exciting for us."

The sixth annual "bare as you dare" ride will kick off at the parking lot on South Grand Boulevard and Hartford Street at 6 p.m. for a pre-ride festival that includes "live music, live art, an expo of bicycle, environmental, and body acceptance organizations and businesses, speakers, and a rally." Activism, nudity, exercise and more!

Last year, the ride doubled in participation to about a thousand riders, Co says.

"That was a pretty dramatic increase," she says, adding, "It's so unique and creative.... It's an excuse to do something very crazy that you normally don't get to do."

To get you pumped, here are some of our favorite photos (warning: some on next page are NSFW) from last year's ride, followed by the group's full announcement. 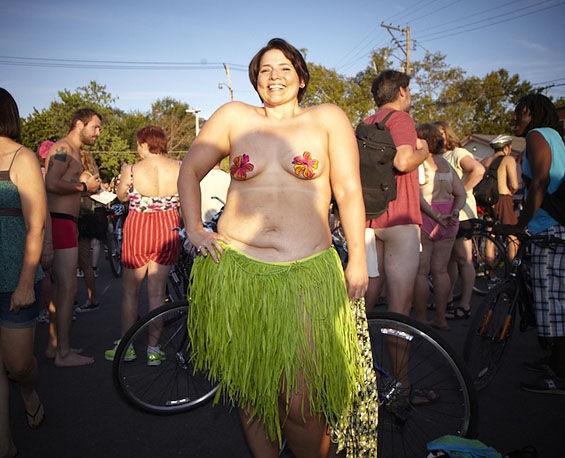 Continue for more photos (some of which are super NSFW!).