ANDY PAULISSEN
Grbic closed the restaurant side of its business this year.

By the spring of 2021, it seemed like restaurants had reason to celebrate. Vaccines were readily available, dining rooms were back to unrestricted capacity, and hungry diners with money to spend were eager to return to their favorite spots. There was reason to feel optimistic that those who survived the initial, acute hardships of the pandemic were out of the woods. However, with supply-chain issues, rising product costs and a seismic staffing crisis, this global nightmare has a long tail, resulting in sustained pressure on an industry that, nearly three years later, still feels very much in crisis. There have been winners, to be sure, but if you ask any operator, chef, bartender, dishwasher, line cook or server in the industry, they'll tell you the same thing: COVID-19 took the cracks that already existed in the hospitality business and left an industry shattered.

This year, we saw some of our longtime favorites succumb to these pressures, saying goodbye not because they couldn't make it but because the moment called for a reevaluation of priorities. Some bid farewell as they retired. Others were forced out by circumstances beyond their control, and a few simply could no longer financially justify staying open. Whatever the reason, there is no question that their losses have left a hole in our area's dining community that will always be there.

Here are the 10 we will miss the most:

Cafe Natasha's
Hamishe Bahrami needed to retire. There's no question about that. There's also no question that the storefront that used to house the beloved Cafe Natasha's has reinvented itself beautifully into Salve Osteria. However, no one will ever replace Mom's cooking. The world is a darker place without those beef kabobs.

De Palm Tree
The last restaurant holdout in the now-razed Jeffrey Plaza, De Palm Tree was a delightful homage to owner Easton Romer's homeland. Now, it's an overflow space for a big-box store. Because we all need another place to buy 80-packs of toilet paper.

Courtesy Diner
Courtesy Diner may live on in its newer locations, but that Kingshighway spot will forever be the one and only.

Bob's Seafood
It's difficult to decide which casualty of the University City Costco development is the hardest to bear, but Bob's certainly makes its case. The definitive place to get the best seafood in town for decades, it's hard to believe this hallowed ground is soon to be a drive-thru fast-food outfit. Is nothing sacred?

Pho Grand
After three decades, My and Tami Trihn said goodbye to the South Grand restaurant district they helped create. It's a much-deserved retirement, though it's hard to imagine a world without their delectable pho. 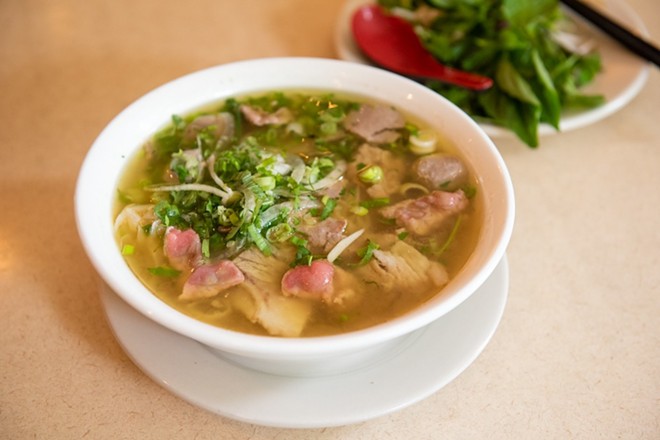 Vu Phong
Pho Grand and its pho is missed.

Rise
Rise was an anchor of the Grove, and its closure feels like something essential to the neighborhood is now gone. Thank you, Jessie Mueller, for bringing such a beautiful, accepting space into our lives.

Mandarin House
One of St. Louis' first Chinese restaurants, Mandarin House will be remembered for setting the standard for Chinese American cuisine in St. Louis.

Grbic
It's impossible to understand the impact the Grbic family had on bringing Bosnian cuisine into the mainstream of the St. Louis dining scene. Its legacy lives on as an events space, but the restaurant's closure hits hard, even if it was the best decision for the family.

Sweetie Pie's Upper Crust
In its 25-year run, Sweetie Pie's put St. Louis soul food on the map, created a star out of owner Robbie Montgomery and made St. Louis just a little bit more delicious. Despite the drama that surrounded its later years, it will be remembered as a true St. Louis icon.

Welcome to The Good, the Bad and the Ugly of 2022, a look back at the ups and downs of a turbulent year in the St. Louis region.

Cheryl Baehr is the dining editor and restaurant critic for the Riverfront Times and an international woman of mystery. Follow her on the socials at @cherylabaehr
Read More about Cheryl Baehr
Scroll to read more St. Louis Metro News articles (1)