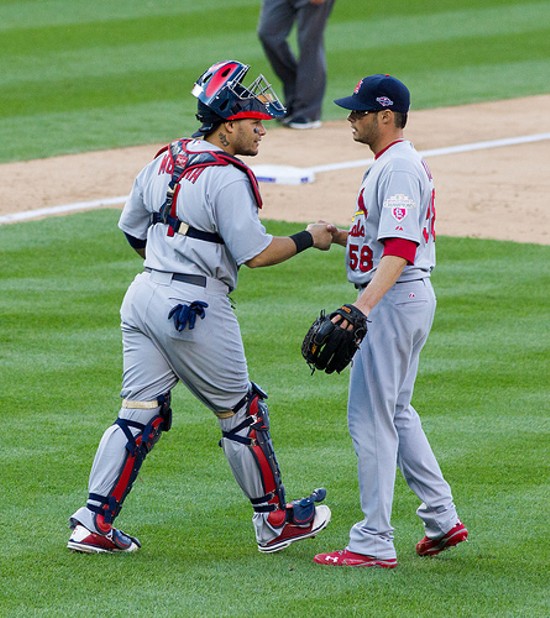 Keith Allison on Flickr
Yadi says: If you make a bet, you have to shake on it.

It's Game Day, Birds! The Commissioner's Trophy and a year's worth of bragging rights are at stake for the St. Louis Cardinals, and fans are finding ways to make the Fall Classic even more interesting.

We found politicians, radio stations and even churches who are wagering on the series. Here are six St. Louis v. Boston World Series bets:

1. The Governors - Missouri Gov. Jay Nixon and Massachusetts Gov. Deval Patrick win the award for tastiest bet, though the loser still may not be able to stomach it. Nixon's ante? A four-pack of Cardinal Cream Soda from Fitz's Bottling company, a box of Bissinger's Chocolates and Italian pastries from Missouri Baking Company on the Hill. Patrick is wagering seltzers from Polar Beverages, the country's largest independent soft-drink bottler; New England clam chowder from Legal Sea Foods; and baked goods from Dancing Deer Baking Co.

2. The Mayors - Actually, St. Louis Mayor Francis Slay decided not to make bets with Cardinals opponents this year, saying it's just not fair to the other cities. "You know, the Cardinals spoil us with near-ubiquitous trips to the post-season, and frankly, I think the mayor just started to feel bad about always collecting the winnings," says Maggie Crane, Slay's communications director. "Yeah, I know, Boston proved different last time. But it's a new year and a different team."

No mayoral sports bet. I would, however, welcome a visit here from @mayortommenino. #fgs