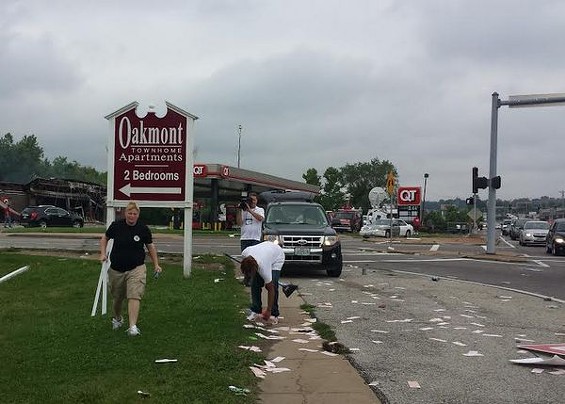 Jessica Lussenhop
Volunteers clean after riots in Ferguson Sunday night as a news crew looks on.

Feeling helpless? Wish you could do something to stop the violence on TV and in your social-media streams? You're not alone.

Four days of unrest have left St. Louis furious, mournful and emotionally drained just as the spotlight of international media shines down on the region's struggles with racial inequality. The anger runs so deep that even volunteers who cleaned the burned-down QuikTrip in Ferguson Monday morning were harassed by people saying they were "helping the white man."

See all Riverfront Times coverage of protests in Ferguson over Michael Brown's death.

With the week only halfway over and violence in Ferguson escalating with the news of two shootings Tuesday night, Daily RFT is collecting actions St. Louis residents can take to respond to the death of Michael Brown and the riots in Ferguson. Scroll to the bottom to see how you can add your own event or fundraiser.

1. Donate money to Michael Brown's family. Donations to the Michael Brown Jr. Memorial Fund can be made at any Fifth Third Bank.

There's also a Gofundme site launched to raise $15,000 for Brown's family. Update: The online fundraisers appear to have shut down. We'll update if we find another online place to donate.

Here's another place to donate:

THIS is what we need to more of... Community. Compassion. Care. Contribution. #ferguson #mikebrown @StraubsMarkets pic.twitter.com/mQbFBRJTKe

2. Go to a prayer vigil, community meeting or other nonviolent gathering. Supporters of the Brown family will meet for a celebration of his life and a concert featuring Ferguson artist Brian Owens at 6 p.m. Wednesday in O'Fallon Park in the city of St. Louis.

Update: Operation Black Struggle is organizing a march downtown Monday, August 18. Protesters will meet at 3 p.m. at Kiener Plaza and march to the governor's office in the Wainwright Building.

Know of more vigils or meetings? Email [email protected], and we'll add them.

3. Donate to the Ferguson food pantry. The food pantry at St. Stephen's Episcopal Church has had to turn families away after unrest closed the store that usually stocks its shelves. A sign on the door asks people to "pray for all in sorrow." Donations of canned goods or boxed food are welcome at 33 North Clay in Ferguson.

4. Donate to the North Campus. Have you been following Alderman Antonio French's amazing video coverage of the protests in Ferguson? Consider giving back to a cause close to his heart. French is the president of the North Campus, which offers in-school tutoring and after-school tutoring and enrichment programs for third through eighth graders living or attending school on campus in north St. Louis city. The organization has raised $20,000 toward its $50,000 goal. You can set up an automatic monthly donation, or click the "donate" button to make a one-time pledge.

4. Sign the petition for the "Michael Brown Law." More than 1,000 people have already signed a petition demanding that police officers to wear cameras at all times. Police in Columbia have been wearing body cameras since last month.

Update: If you want to help people who have been arrested during the unrest, you can donate to the Ferguson Legal Support fund here.

5. Attend or organize a cleanup in Ferguson. Churches are doing it. Families are doing it. Grab a shovel, broom or trash bag and head to Ferguson. If you're looking for an organized cleanup, volunteers met at the First Baptist Church in Ferguson this morning and are cleaning until this afternoon.

7. Keep your porch light on. It sounds simple, but people across St. Louis are keeping their porch lights on all night to show solidarity with those demanding justice and peace in Ferguson. Nine thousand people say they're keeping on their lights in this Facebook event.

Update: And here's a Feed the Students of Ferguson campaign to raise money for students facing hunger after school was delayed and nearby stores were closed.

Have a suggestion for this article? Email [email protected]