A Cop Targeted Women for 'Neanderthalling.' Wesley Bell Tried to Protect Him 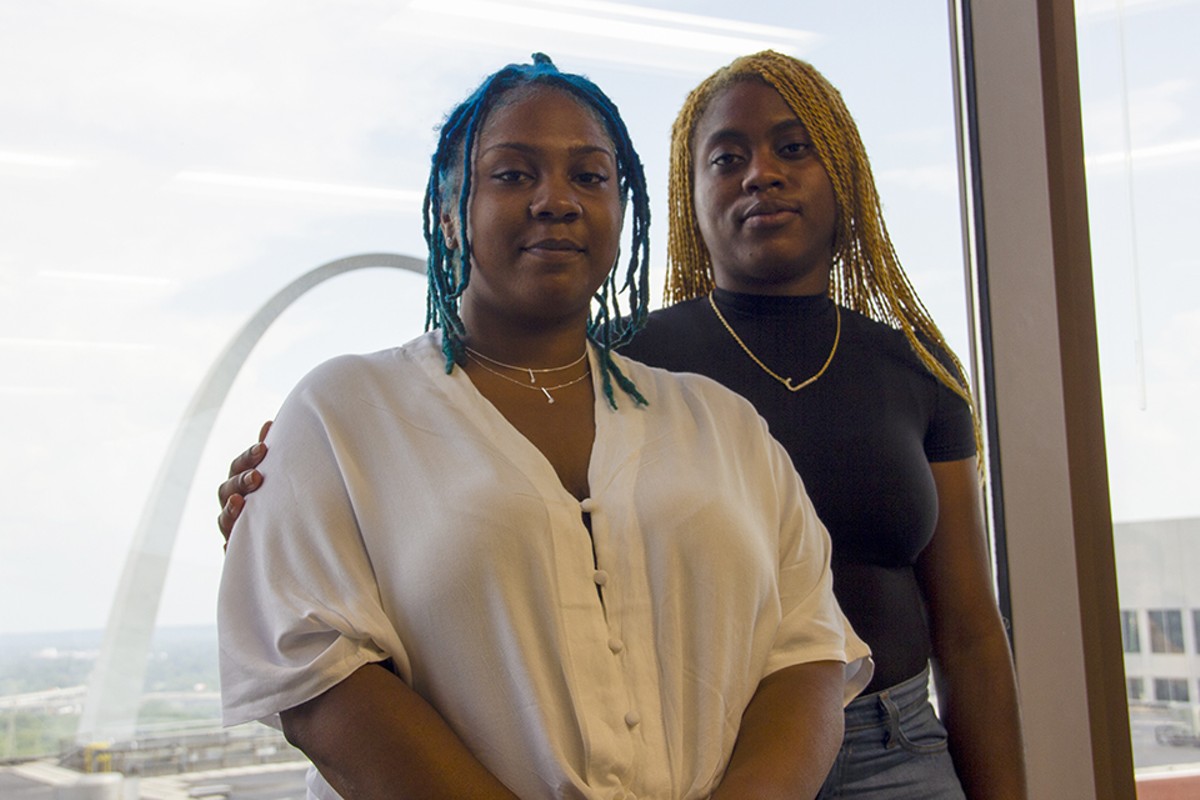 Wesley Bell’s office claims Deja Holland and Najae Jordan (right) assaulted officers on August 11, 2016. “You guys have been telling the story and narrative for so long,” Jordan says. “Just let us tell our side.” DANNY WICENTOWSKI

A camera recorded Sgt. Jason Groves of the Riverview Police Department as he explained his observations of two Black women who were walking together in the early morning hours of August 11, 2016.

"They were acting very suspicious in nature," Groves says in the sworn deposition in February 2017. "They were walking around that corner, kind of Neanderthalling around, kind of moving around in a strange manner."

At the time of the recording, nearly six months had passed since Groves and a partner confronted Deja Holland and Najae Jordan. Both women were arrested and faced multiple criminal charges for assaulting a police officer, resisting arrest and disorderly conduct.

Groves delivers his testimony in the patient, self-assured tone of a veteran cop. Across a table, he faced defense attorney Thomas SanFilippo, who happened to know more about the night in question than he was letting on.

In fact, SanFilippo had already obtained key surveillance footage of the incident from a nearby business. The moment Groves was now describing — how he had supposedly followed his cop's instincts to realize that the women's "Neanderthalling" required investigation — appears to have elapsed over about five seconds on video. The footage shows a Riverview patrol vehicle, lights flashing, as it cuts sharply in front of the figures of Holland and Jordan, who were walking home at about 1:30 a.m.

"As a police officer," Groves continues in the deposition, "you do this long enough, obviously you watch body language, and you learn people very, very well when something is not right."

According to Groves, it wasn't just their posture, but the pair's location that justified his suspicion: Riverview is a tiny village in north St. Louis County, covering less than a single square mile near the riverfront, but as Groves explained, it has a bustling drug trade which he knew to be centered on an intersection near Diamond Drive and a small convenience store.

As Groves and a partner drove through the area that summer night, he tells SanFilippo, they spotted the two women "kind of looking around, almost like they were on that corner waiting to either buy something, purchase something, or something of that nature."

"In the narcotics realm of gang interdiction, we call it TU — Thug University," Groves says, "because that's where they go to learn the trade of heroin, cocaine — anything you can think of. They meet and they congregate there."

But Jordan and Holland were not who Groves made them out to be. The women lived together in Riverview and had been just blocks from their apartment when officers pulled up. They had no criminal records, and, beyond the purported display of suspicious body language, Groves could offer nothing to connect them to the drug corner, or any crimes for that matter.

Looking back on it today, SanFilippo calls Groves' statements "the most racist thing I've ever heard in a deposition." But he wasn't the only attorney present that day to hear them.

There was also Wesley Bell. Before his dramatic 2018 political ascent to become St. Louis County prosecuting attorney, Bell worked in multiple roles in municipal court systems across north St. Louis County. In Riverview, he had served as the municipal prosecutor since 2012.

Like any prosecutor, the position came with the responsibility to choose which cases to pursue, what crimes to charge and what punishments to seek if those cases progressed to trial.

But Bell didn't want this case to go to trial. For one thing, Groves' deposition was a defense attorney's dream: In a village where the population is 70 percent Black, here was a white officer under oath, describing a process for targeting two Black women that had nothing to do with seeing evidence of a crime — and that was just the start of Groves' questionable behavior that night.

Bell could have dropped the case. Instead, eleven months after Groves' deposition comments about "Neanderthalling," the Riverview prosecutor sent SanFilippo a written offer that would make the criminal charges pending against his clients simply disappear.

It came with a catch: The women would have to agree to never sue the Village of Riverview or the cops who terrorized them.

All they had to do was sign their names, and walk away.


August 11, 2016, had started out as a normal day for Najae Jordan and Deja Holland. The couple woke up early to catch two buses and a MetroLink train to arrive in time for their shifts at a Walmart in Chesterfield. In the evening, they returned to the small apartment in Riverview, on Diamond Drive, where they'd been living together for about a year. They later went to visit a friend.

At about 1:30 a.m., they were walking home when Jordan says she noticed the Riverview police patrol car pass them. It slowed, and from within came the voice of an officer asking her how her night was going and where she was heading.

"I was just like, 'We're just minding our business,'" Jordan says. Holland remembers the exchange as well — and that the cop didn't like Jordan's response.

"That triggered him," Holland says. They would later learn the officer was Sgt. Jason Groves. The intensity of those moments is still fresh in their minds, the feeling of being watched as the patrol car rolled by — only to realize that it had circled back for a second pass.

Jordan remembers the events happening fast: "They pulled the car in front of us, and they were like, 'Put your hands on the hood.'

"I just felt like, 'This is wrong. We didn't do anything,'" she says. "So, I pulled out my camera at that point, and I was shaking so bad I couldn't pull up the camera app."

That was when Jordan says she heard Groves shout to Officer Jeffrey Lakebrink: "Get her phone." Jordan says she "went into panic mode and just started walking backwards."

By then, she had managed to activate the camera app. The resulting video clip, about a minute long, shows Jordan running from Lakebrink.

"It's the police following me, y'all," she says in the recording, which was reviewed by the Riverfront Times. "It's Riverview police following me. They got mad because I wouldn't tell how my night was going, so he mad and chasing me."

The video captures the figure of Lakebrink trailing behind in the dark. The audio includes the sound of Jordan's flip-flops slapping against the pavement and Groves shouting after her, "I'm going to mace you."

Jordan evaded her pursuers, sprinting for two blocks and making it to her apartment complex.

The door to the building was usually locked, but not that night. Jordan slipped inside. She says she immediately called her father, who lived just a few streets over.

While Lakebrink chased Jordan, Holland says, Groves stayed behind. He removed her handcuffs — "I'm only doing this because you're cooperating," she remembers him saying — and together they made the short walk to the glass front door of the apartment building.

At this point, a surveillance camera from a nearby convenience store shows Groves, Lakebrink and Holland walking toward the building. A third cop, a Bellefontaine Neighbors officer named Michael Pedroli, also arrived on the scene, just in time to participate in the standoff at the transparent front door.

Inside was Jordan. With the officers just feet away, Jordan began opening and closing the door as she frantically shouted at Holland to get inside, but there was too much space between them, and too many cops. After several tries, Lakebrink and Pedroli successfully grabbed the door before it closed and hauled Jordan out onto the sidewalk.