Journalist Denise Hollinshed, left, has been writing about Beverly Jones for the 63106 Project. PIERRE GUERIN 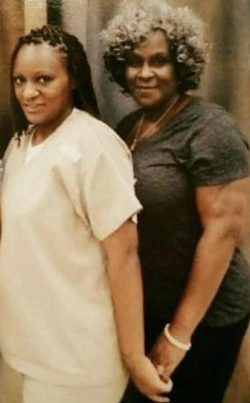 After his death, I discovered a voicemail from Darnell that escaped my attention. It haunts me to this day.

"Denise, I want to say I love you, and I don't know what's going on with me but I'm just not well. But let me say that I'm very happy that you are my sister. I wish that we would have had more time together, but as you know I was in that mental hospital for quite a while. And I was a bad boy and they sent me over to that maximum security building. I didn't like the way they were treating Blacks. I didn't like the way they were treating me. Anybody from the city, they treated them bad. They called us City Six.

"But anyway I got the pictures. Thank you very much. Please get in touch with me. I have something to talk to you about. ... If you get a chance, give me a call and I'll talk to you later."

Yes, just like Jones, I had a family member who served time; in his case more than ten years for a burglary charge. He was incarcerated at Fulton State Hospital because a judge took into consideration that he was dealing with mental health issues. Just like Jones and her kin, I never stopped loving and praying for my brother, nor did our other eight siblings. And I am proud to say he more than made up for his crime when he was released some 30 years ago.

In fact, his light shined so brightly that he was the subject of a St. Louis Post-Dispatch feature story on his shoe-shining skills at St. Louis Lambert International Airport. His outgoing, friendly manner brought customers back to him again and again. Darnell would shine service members' shoes for free. "You are doing something great," he would tell the soldiers. "Just give me a hug when you come down from the chair."

On March 25, my family members and I took Darnell's boxed ashes to Calvary Cemetery to our family plot located not far from Tennessee Williams' headstone. There we put Darnell's ashes atop our mother's grave. My husband Pierre sprayed water over them with the thought that they would drift down through the earth and mix with Mom's remains.

I've spent more than 30 years as a journalist focused on public safety and have seen far more bloody crime scenes than anyone should have. Even so, writing these COVID stories has been draining and extremely sad. I am having a hard time understanding how Beverly Jones or anyone with health issues might put off getting the vaccine.


But journalists aren't here to judge. Mostly what we do is listen, and then in the best way possible, write a story that helps readers see the world as they do.

Physicians and public health workers with a special expertise in such ailments as lupus and COPD have tried to reassure patients they can trust that the vaccine will protect them and do no harm. Those who have already been infected — as Jones has — do indeed create antibodies against the disease. But experts don't know how long this protection lasts. Getting a vaccine, they say, can also help protect those around you.

Still, Jones is skeptical. In March, she said: "We take enough medicine as it is, and now you want us to inject something else into us?"

But in late April, she seemed to soften just a bit on the subject. "I still haven't made my mind up because I have all these underlying issues. I have lupus, COPD and osteoarthritis. No one is able to tell me what effect that shot will have on my condition. Just like the flu shot, I took my time to get that. If they can show whether it's going to benefit me, I will consider getting it. But not until then."

As we like to say in the storytelling business, "To be continued." We will keep you apprised as Beverly Jones and her family struggle to stay safe in the time of the pandemic.

Denise Hollinshed served as a crime reporter for the St. Louis Post-Dispatch for 21 years until retiring in 2019. In her work, she has specialized in writing stories that go beyond crime to examining root causes, such as poverty and social determinants of health.

Before Ferguson Beyond Ferguson, a nonprofit racial equity project, is telling the story of families in 63106 one by one over the course of the pandemic. This is the second chapter on Beverly Jones' life. Hollinshed will be following the challenges she faces until the pandemic abates. The Riverfront Times has published other stories as part of the project, and so have other St. Louis media. You can find an archive of the stories at https://beforefergusonbeyondferguson.org/63106-project/.

Denise Hollinshed interviewed Beverly Jones on May 12 in a public forum called The Great Divide: Race in Our Region. The Zoom session, sponsored by interfaith groups, can still be viewed online. It starts at the 46:50 mark.