A Hose Job In the Mountains? 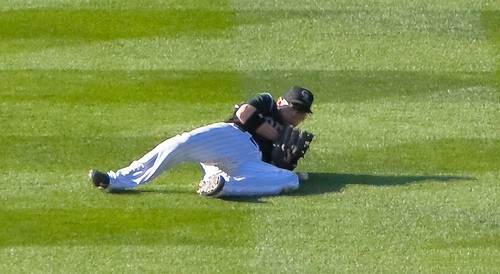 Photo courtesy Craig Welling
Ladies and gentlemen, it appears the Cardinals may have gotten screwed over in Sunday's game.
Well, sort of. Let me explain.
We all saw the catch Clint Barmes made to end Sunday's game. Julio Lugo on third, Albert Pujols on first, Ryan Ludwick at the plate, two outs. Colorado closer Huston Street threw a 1-2 slider to Ludwick that bit down on the outer half of the plate. Ludwick swung and floated a soft pop fly to shallow right field. The ball looked as if it would fall in, the Cards would tie the game, and Street would be hung with the blown save. Instead, Barmes, playing second base, raced out toward right, back turned to the infield, and made a remarkable grab at full speed, tumbling to the turf after the catch. He then stood up and tossed the ball to first base for a game-ending double play, as Albert had taken off with the hit and was standing nearly on third base when the grab was made.
It was one of those plays you can barely believe just happened, even though you saw it with your own eyes. It was also potentially an historic play, as it kept the Rockies 2 1/2 games clear of the surging Atlanta Braves for the wild card lead. That ball gets down, who know what happens? Clint Barmes may have saved the Rockies season with his incredible tumbling catch. Seems like a perfect baseball story, doesn't it?
There's really only one problem with that story.
It may not have happened at all.
See, apparently there's a bit of a question as to whether or not Barmes really did make a catch, or whether he just sold the catch to the umpires even though the ball hit the turf.
As first noted locally in Derrick Goold's [email protected], there appears to be photographic evidence the baseball did, in fact, hit the ground somewhere between Barmes' slide and his tumble. Denver Post photographer Hyoung Chang got two excellent shots of the catch, only one of which made the paper. The one that did appear in print for public consumption shows Barmes after his tumble, with the baseball clutched in his bare hand. A great photo to go with a great play.
Interestingly enough, there was another shot, taken by the same photographer, which appears to show Barmes clearly not catching the ball. Or, at least, it shows the baseball in a location which makes it very difficult to believe Barmes could have actually corralled the ball. What's unfortunate is the lack of a useful in-between image, one which shows where the ball was during Barmes' tumble.

We know where it was before, and we know where it was after, but what did it do in the meantime?
Lucky for us there's a man named Craig Welling who also takes photographs of the Colorado Rockies. He runs a photoblog titled, appropriately enough, Colorado Rockies Photos, and he's got some really great stuff on there. What really matters to us at the moment, though, is just one image. It's an image of Barmes right in the middle of flipping over, and it does seem to show us where the ball was during it.

It certainly looks as if the ball hit the ground, didn't it? In which case, the Cardinals did indeed get screwed. On the other hand, I just can't bring myself to get too very upset about this whole deal. Why am I not upset? Because despite the fact Barmes may not have really made the catch, the end of the game was entirely Albert Pujols' fault.
I don't care if the ball looked as if was going to fall for a base hit or not. There is no way in hell Albert should have ever been almost all the way to third base when the catch was made. I understand he's one of the most aggressive baserunners in the game, and always trying to grab that extra little bit of an edge in scoring runs. But on a ball like that, you go halfway then wait. If the ball drops, you go to second. If it's caught, you run like hell back to first base to keep from getting doubled off and ending the game. Same thing with Julio Lugo, who just came on down the third base line as if it was a hit all the way. Lugo should have gone back to the bag and waited to see what was going to happen. It falls in, Lugo has plenty of speed to make it home without question. It turns into a catch, Lugo just tags up and trots on home as Barmes rolls over on the grass.
Instead, both runners treated the ball as if there was never any doubt it would fall in, and the game ended in the manner we all witnessed. If the runners had made good decisions, the game would have been tied, man on first, with two outs.
So even though it certainly appears the Cardinals may have cause for complaint, and this story is beginning to make the rounds of the talk radio circuit with much gnashing of teeth, I can't help but think the team shot themselves in the foot either way. The umpires made the run call, it appears, but the players really screwed the pooch.
It really sucks the game ended on a busted call, it really sucks the Cardinals failed to add to their win total in the midst of trying to get home-field advantage for the playoffs, and it really sucks the Rockies once again appear to have gotten a huge gift call as they try to make their way into the playoffs.
So really, not a good day pretty much all around.