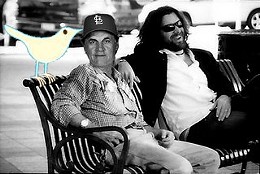 TLR, Bob Schneider and the Twitter bird. Don't ask me, but the image works.
Tony La Russa is driving home. Rather than flying home after the season, he's taking his time heading back to the Bay Area this year and re-creating a trip he took in 1996, which you all may recall was the year he took over the Cardinals' managerial reins in the first place.
Personally I think this is a great idea. There's nothing better than a couple of days alone in a car driving across the country to really clear your head. I used to make the trip out to Columbia about once a month to visit my friends who went to Mizzou, and I would always enjoy the time spent driving, because it was useful. I decided to end a long-term relationship on one of those trips, and it was the best decision I've ever made. When a friend of mine (who shall remain nameless) confessed to me he was gay and had a thing for, well, um, me, I had no idea what to say or how to handle it. I did the best I could, but things were incredibly awkward after that, until I took a drive to Columbia. I finally figured out the right way to deal with his feelings, and now we're getting married next month. (Not really. He decided he could do better. Bastard.)
So yeah, a road trip is an outstanding way to clear your head and figure out just what it is you really want to do. But no road trip can possibly be considered complete without the proper listening. You need tunes that reflect your state of mind, that say something about your life. Unfortunately for Tony, I've seen the kind of stuff he listens to, and I just don't know that the Journey boxed set is going to get him where he needs to go. So as a personal service to the manager, I've put together the playlist for Tony La Russa's long drive back home.
"Should I Stay or Should I Go" - The Clash -- Oh, sure, it may seem trite, but the question for Tony is spelled out right there in the title. Plus, before making any important decision in life you should always, always consult Joe Strummer for advice.
"2002" - Bob Schneider -- Perhaps it might be helpful for Tony to revisit his glory days, so we're going back to the 2002 season, when he managed the single greatest feat of his long career. He held together a team reeling from the death of a beloved teammate and the pitching staff's veteran ace, Daryl Kile. It was Tony La Russa's finest hour, holding that group together, and one of the great managerial jobs of all time.

​"Purple Rain" - Prince -- This doesn't have anything to do with La Russa. "Purple Rain" on a road trip is just awesome.
"The Party's Over" - Willie Nelson -- Cheerful defiance and driving steel right into the grave are all well and good, but Willie Nelson won't ever lie to you: All good things must end. Maybe that time is now, maybe it isn't. I suppose the only one who can really decide that is Tony La Russa himself. But I think there's something to be said for knowing when it's time to just let it go and find something else to love.
Well, I hope that helps, Tony. It's a long-ass drive from St. Louis to Frisco, and that's a lot of hours to fill. When you make your Hall of Fame induction speech, just don't forget who to thank for the tunes.