Let me tell you something, folks: it ain't easy being Alex Rodriguez these days. Sure, he's got all the money and talent that most of us only dream of ever possessing, but what kind of life has it gotten him?
First, it was the whole Madonna thing. Really, Alex? I mean, come on, man. Dude's got like half a billion dollars in the bank; he doesn't need to be hitting on Madonna. I just don't get it. Sure, there are persistent questions about the guy's sexuality, but is this the best way to try and quell those rumors?
click to enlarge 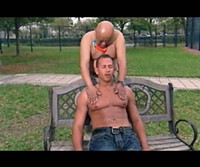 babble.com
Trending up...
Now, don't get me wrong; I'm not trying to claim that Madonna never served as- ahem- fuel for the fire during my teenage years. Once upon a time, the woman was a sex goddess, after all. Around the time she was in Dick Tracy, oh my god. But let's face it: that is some heavily developed property, if you know what I mean. Really, really heavily developed. Vanilla Ice once built a condo there. Hell, I thought Guy Ritchie was slumming a little with Madge, and Ritchie is no A-Rod.
Then, fresh off the heels of all that ugliness, Joe Torre comes out with a book, or contributes to a book, or just thinks about a book, or whatever the hell, talking about our boy Alex in less than flattering terms.

Not only has "A-Fraud" officially entered our lexicon, we now know that there was Rodriguez was obsessed with Derek Jeter. And really, is it ever a good thing when you have something in common with Mariah Carey? The answer you're looking for is no.
And now this. Apparently, A-Rod tested positive for steroids back in 2003, when the tests were all supposed to be anonymous. Yeah, remember that? The whole, "just a survey test" thing? Well, turns out that somehow, the names were totally saved on that. And whose name, of all the 104 players on that list, just happens to get leaked to the media? That's right. Alex Rodriguez, the $30 million man. Oh, and did I also happen to mention that A-Rod was the MVP of the American League that year? Interesting, no?
click to enlarge

dailymail.co.uk
...Trending down.
So this is A-Rod's life. Nobody looks at him any longer and thinks, "best shortstop of his generation, maybe ever." Nope, it's sexual ambiguity. It's an over-the-hill pop star with a fake British accent and a labial reconstruction bill you wouldn't believe. It's A-Fraud and Single White Female with Jeter. And now, it's the big "S." Steroids.
Well, at least this will give the New York fans some new material when they're heckling him. It's tough to stay original when a guy doesn't give you any sort of fresh ammunition. Of course, that doesn't seem to be much of an issue with Rodriguez.
What have we learned from the life of Alex Rodriguez? Money can't buy you happiness, and it can't buy you credibility, either.
So maybe spare just a moment in your daily life, and give a thought to A-Rod. Let's face it, he needs all the help he can get.