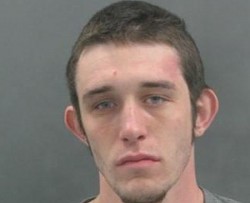 Aaron Bogue, charged with a felony in the death of David Bense.
Aaron Bogue, 21, has been charged with leaving the scene of an injury crash in the hit and run death of tow truck driver David Bense. Bense was reportedly wearing a safety vest and placing road flares around a stalled vehicle on I-70 near West Florissant Road when Bogue struck and killed him Monday night. Bogue continued driving, but was apprehended a short time later.