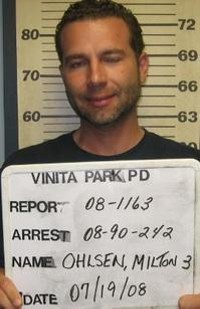 Ohlsen when he was arrested for weapons charges in 2008.
Update 3:15 p.m: Aaron Reid is a police officer currently commissioned with Uplands Park, according to an official with the state's Department of Public Safety. Reid's license remains on probation with the state after an incident in 2007 when he served as police officer in Vinita Park and broke protocol by running a background check on his cousin.

According to another source, Reid also worked as a cop in Wellston before joining Uplands Park. A sergeant with Wellston tells Daily RFT the name sounds familiar but couldn't confirm employment.

The Post-Dispatch reports this afternoon that Uplands Park has now terminated its relationship with Reid. Reid and Ohlsen met around 2006 when Reid became Ohlsen's bodyguard at a time when Ohlsen was promoting mixed-martial arts fights. A source describes Reid as a "350-pound black guy of sheer muscle."

A man who rode to Clayton with Milton "Skip" Ohlsen on the day Ohlsen allegedly planted a bomb inside a parking garage has pleaded guilty to "misprision of a felony" for having concealed and misrepresented his knowledge of the crime.

Aaron Reid, 26, of the 63132 zip code that incorporates Olivette, is charged in a case filed today with lying to St. Louis County detectives in October 2009 when they asked him whether he had knowledge of the bombing. According the U.S. Attorney's Office, Reid was with Ohlsen on October 15, 2008, when they parked in the vicinity of the parking garage and parted company to run errands.

U.S. Attorney Richard Callahan stated in a news release today that there was no evidence nor did officials believe that Reid had any knowledge of Ohlsen's intentions in advance of the bombing. The crux of the crime, Callahan said, "was Reid's subsequent concealment of crucial information when it became apparent that Ohlsen might be involved in the bombing."

The plea agreement which Reid struck with the fed has been sealed, and there's no information in public documents as to how Reid knew Ohlsen. The attorney handling the case for the feds, Carrie Constantin, tells Daily RFT that she's barred from releasing any information in the case not already made public. We have a request out with her boss, Callahan, to see if he might explain the relationship between Reid and Ohlsen.

Reid doesn't have any other criminal charges or convictions in Missouri according to a quick records search. Sentencing for Reid is set for October 26, in which he could get three years in prison and fines up to $250,000.

Last month Milton "Skip" Ohlsen pleaded not guilty in connection to the bombing, in which prosecutors believe he was targeting the attorney representing his ex-wife in their divorce. Police were searching Ohlsen's downtown loft in December 2008 for evidence relating to weapons and mortgage fraud charges when they came across evidence they believe connects him to the bombing. That search also produced evidence involved in the political downfall of state senator Jeff Smith for whom Ohlsen had worked as a campaign consultant.