Updated: Abortions Could Be Considered Murder Under New Missouri Bill

Flickr / Mike Mozart
A pre-filed Missouri bill would put the legality of emergency contraceptives at risk, according to legal experts.


Update: The Food and Drug Administration on Friday updated information included on Plan B labels to specify that the emergency contraceptive does not prevent fertilized eggs from implanting in the womb.

Pamphlets purchased with the pill and the FDA’s website previously stated that Plan B may prevent a fertilized egg from implantation. This will change after Friday, and according to one of the law experts quoted in this story, Sidney Watson, this proposed Missouri bill should now not have an effect on emergency contraceptives if enacted into law.

This story has been updated to reflect the FDA’s recent specification that emergency contraceptives do prevent implantation and therefore in no way cause abortions.

A proposed Missouri law would allow women to be prosecuted for abortions and potentially criminalize crossing state lines for abortions.

A bill pre-filed by Senator Mike Moon (R-Ash Grove) this month would change the state’s definition of “person” to begin at the moment of fertilization, opening the door for criminal charges against individuals who terminate their pregnancies, legal experts say.

While lawyers who spoke to the RFT see this proposal as a reckless application of criminal law, Moon says his Senate Bill 356, the “Abolition of Abortion in Missouri Act,” is an acknowledgement of the sanctity of human life.

“I believe science proves that life begins when a female egg is fertilized by a male sperm,” Moon says. “And because of that, I think life should be protected from the beginning till the natural death.”

Moon’s bill has a slim chance of becoming law — thousands of bills are filed each year, and only a handful make it through committee, much less approval by both the Missouri House and Senate. And Moon acknowledges that he has tried and failed to pass similar legislation at least three times before.

Still, legal experts worry about the ramifications of his proposal in light of Missouri’s swift enactment of its so-called trigger law after the U.S. Supreme Court’s overturning of Roe v. Wade last June.

If enacted, Moon’s bill could allow an abortion seeker to be prosecuted with a whole host of charges — from murder, attempted murder or assault to, for example, endangering the welfare of a child if a pregnant person is found to have consumed alcohol, according to Marcia McCormick, a professor of law at Saint Louis University.

“Anytime an egg doesn’t implant, it could create an opportunity for the state to at least investigate if the failure to allow implantation was intentional,” McCormick says. “If it was intentional, then maybe there could be a murder claim because at that point, the ‘child,’ being a fertilized egg, is destroyed.”

Sidney Watson, a professor at Saint Louis University and a specialist in health law, said Thursday that she feared that the bill would also affect contraceptives and IVF.

“The FDA is saying that the science shows that Plan B only works prior to fertilization, which would mean that SB 356 should not have an impact on the use of emergency conception,” Watson wrote in an email to the RFT.

The FDA's website still says IUDs "may" prevent eggs from implantation so Moon's bill may still have an effect. IUDs primarily prevent sperm from reaching an egg, however.

Though pregnancy is medically considered to start after implantation, GOP legislators in Missouri and other Republican-dominated states have tried to ban morning-after pills in the past for being “abortifacients.”

Last year, the Missouri Senate voted to ban Plan B and IUDs as part of a bill to renew a tax on hospitals. The measure did not advance after female senators criticized the language. A revised version of the bill later passed and barred public dollars from being used for any “abortifacient drug or device.” 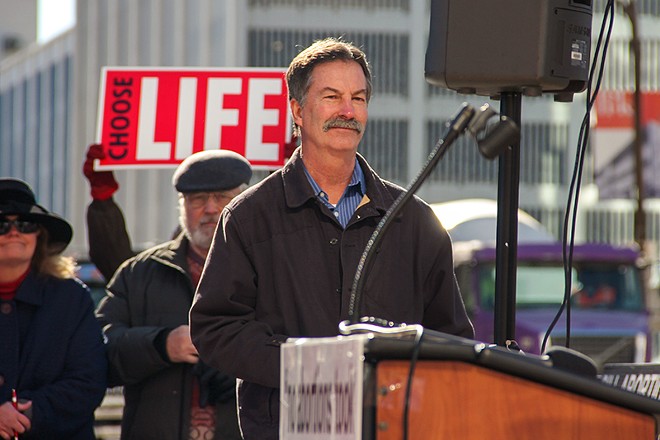 Pro-choice Missourians worried contraceptives would be at risk once again after the federal right to an abortion was taken away. Under Moon’s bill, McCormick says, “any birth control that operates after the moment of fertilization could count as the instrument of murder.”

In a phone call Thursday, Moon said the bill “is not intended to” affect birth control. When asked how that’s possible when some forms of contraceptives prevent fertilized eggs from implantation, Moon acknowledged the bill “certainly might” affect contraceptives.

“The primary focus is on purposely ending a child’s life,” Moon continued.

Moon groups condoms and IUDs as contraceptives separate from Plan B, or the morning after pill. When asked if Plan B would still be lawful under his proposal, Moon responded: “I think there will be lots of conversation about that.”

Plan B “very well could be” causing an abortion if an egg has been fertilized, according to Moon.

Moon’s bill also sparks concern over how violators would be prosecuted, McCormick says.

This, to McCormick, could be interpreted as an attempt to charge Missourians who travel out of state for abortions.

“It seems like they’re trying to get at conduct that maybe isn’t illegal somewhere else or to get around prosecutors in Missouri who’ve said they’re unwilling to prosecute people for violating anti-abortion laws,” McCormick says.

Moon’s bill offers few exceptions. A person would not be prosecuted if they were coerced under physical threat to end their pregnancy. Another exception is given for when a licensed physician performs a life-saving procedure that results in the “accidental or unintentional” death of the unborn child, but only after all other options to save the child’s life are exhausted or unavailable.

This exception confused Watson and McCormick. Ectopic pregnancies (when a fertilized egg implants in a fallopian tube rather than the uterus) can kill a pregnant person if left untreated and fertilized eggs can not survive, according to the Mayo Clinic.

Ending ectopic pregnancies is not “unintentional or accidental,” Watson says. “You mean to do it.”

“It’s not entirely clear that the people who draft bills like these understand how biology works,” McCormick adds.

Moon claims ectopic pregnancies could be an exception if a woman’s life is in danger. However, he points to a procedure he read about where, in early 1900s Europe, a part of a woman’s fallopian tube was excised and an embryo was successfully moved to her womb. (Moon was presumably referencing a 1917 medical journal article in which an American woman was reported to have undergone a similar procedure — though transplanting an ectopic pregnancy is widely considered to be medically impossible.)

McCormick hopes the bill will never pass — not only for its criminal law implications but also for possibly unforeseen consequences. If a fertilized egg is considered a person under law, it could be covered by any state benefit program, she says.

Moon himself has little confidence his bill will advance.

“I don’t think the majority of either chamber have a desire to take on an issue of this magnitude,” Moon says, adding that a vote for the bill may not be the most politically expedient move for his colleagues. “Unfortunately, it’s going to take a monumental effort to get this passed.”