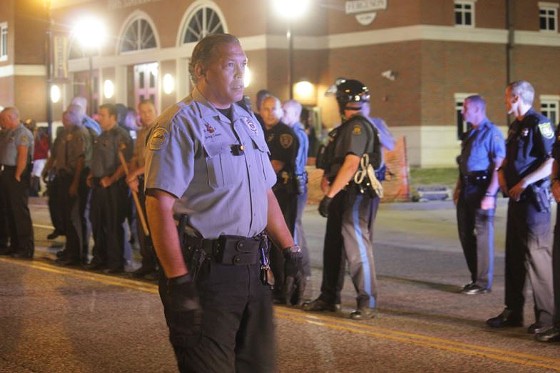 Not long after the fatal August 9 confrontation between Michael Brown and then-Ferguson cop Darren Wilson, protesters, along with the wider public, began demanding Missouri police wear body cameras. Advocates claimed the cameras would keep cops accountable, and the calls only grew louder after Wilson's non-indictment in November.

Now, nearly six months after Brown's death, Missouri lawmakers have turned those demands into several proposed bills. At the same time, the introduction of new technology has raised concerns about the cameras' impact on privacy and police procedure.

"It's a good tool, and any time you add a different evidence stream it needs to be protected," says Republican Representative Galen Higdon. Last week, he proposed a bill that would make footage from police body cameras and dash cameras "inaccessible to the general public."

Higdon, who spent three decades as a deputy for the Buchanan County Sheriff's Department, says he believes body cameras are an undoubtedly effective tool for law enforcement. But he says he's also worried that footage will end up in the public's hands before it can be presented as evidence.

"Capturing a crime on video, whether it was perpetrated by an officer or perpetrated by a perp, the chain of evidence needs to be protected," he says. "If it's put out before, then you've tainted your jury pool and you can't get a fair and speedy trial."

According to Higdon, his bill, HB 762, wouldn't permanently lock the footage away. He claims that it will merely protect the footage during active police investigations, and it won't stop the public and media from requesting the files afterward.

"My intent with this bill is not to protect wrong doers, it's to protect evidence collected from the act. Once it has no more evidentiary value, under Sunshine [Law] they're capable of being released." he says.

That may be Higdon's intent, but his claim runs afoul of American Civil Liberties Union of Missouri's Sarah Rossi, who says the current language of Higdon's bill would, in fact, keep those records sealed for good.

"At a basic level, it's just an end run around Missouri's Sunshine Law," says Rossi, ACLU Missouri's director of advocacy and policy. While she acknowledges Higdon's concerns about the potential misuse of police footage, she says the Sunshine Law's built-in exceptions already allow law enforcement to restrict evidence from active police investigations, among other things. Higdon's solution, says Rossi, is far too broad and would ultimately weaken the Sunshine Law.

Instead, she suggests that body camera issues would be best addressed by new, stand-alone policies.

But Higdon isn't the only lawmaker to suggest that putting boundaries on the state's Sunshine Law is the best way to regulate police footage. Republican Senator Doug Libla has proposed a similar bill that, in addition to exempting body camera and dash camera footage from the state's open records law, would prevent Missouri from mandating that police departments buy body cameras.

The two Republican bills arrived days after Missouri Attorney General Chris Koster, a Democrat, implored lawmakers to address the apparent holes in the state's Sunshine Law when it comes to body cameras.

"Therefore," Koster continued, "I urge you to consider amendments updating Chapter 610 to protect such video footage from those who would monetize it or use it to exploit the people it depicts. I trust in this legislature's ability to make good and conservative decisions in this regard, and I urge you to begin this process so that your work is completed this spring."

Other recently proposed bills are seeking a host of police reforms. That includes a so-called "Ferguson Omnibus" bill sponsored by Democratic Senator Maria Chappelle-Nadal. The bill, which was heard in committee this morning, would force officers to wear body cameras, amend Missouri's use of force standards and would require the appointment of a special prosecutor in the case of a police involved shooting.