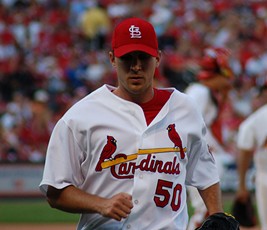 commons.wikimedia.org
​Just a couple quick mid-day baseball related notes:
Adam Wainwright made his return to the mound today, even if only in a spring training capacity, and did so quite successfully, throwing two scoreless innings against the Minnesota Twins.
It was the first time Wainwright had appeared in a game since the end of the 2010 season, as he was shut down before games even began in camp last year and missed the entirety of the 2011 season rehabbing from Tommy John surgery.
Wainwright did not allow a hit, striking out two and walking one hitter. It's much too early to really draw any kind of conclusions about the health of his elbow from his first start of the spring, obviously, but I have to admit there's something very comforting just in seeing Wainwright's name in an actual box score again.
In other pitcher health-related news, Shaun Marcum of the Brewers (and formerly of both the University of Missouri and Missouri State, which puts me in quite a rooting quandary whenever I think of Marcum), was shut down earlier this week with stiffness in his throwing shoulder. The Brewers are downplaying the condition for now, calling it minor stiffness and saying the time off is purely precautionary, but he dealt with a similar issue last year as well.
I have to say, I'm not as optimistic about Marcum as the Brewers are trying to be. He's got terrible mechanics, and the way he looked late last season -- not to mention the postseason -- makes me think there could be something seriously wrong with the righthander. He did make it through most of last season healthy after going through shoulder trouble last spring, so perhaps this will prove a blip on the radar as well. But he looked worse than just tired in the NLCS last year; he looked borderline done. You never hope for injury, even in a rivalry, but I'm thinking Marcum is in for some serious missed time this year.