Send a News Tip
The Blues have one week 'til their home opener against the Thrashers of Atlanta, and while Scottrade Center employees are likely busy cleaning up after last night's Kings of Leon show, we wonder what off-the-ice entertainment the Blues are cooking up for this season. Sure the mascot, Louie, is pretty great, but what about on the high-tech side? What are the Blues' video technicians going to put on the jumbo-tron this year that's going to get us talking? 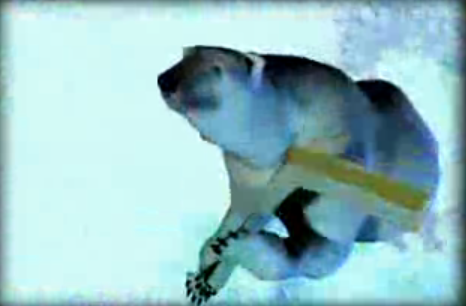 The University of Alaska-Fairbanks hockey team has a polar bear that will haunt your dreams.
One thing's for sure, no matter how blood-pumping the Blues intro is, it has some tough competition: that of the University of Alaska-Fairbanks' Nanooks hockey team, with its jet-pack-wearing, hockey stick-wielding, stadium roof-smashing polar bear. This video, although more than a year old, is getting passed around the interwebs this week, and for good reason.

Just watch, video after the jump.

Hat tip to Cardsdiaspora for the link.