Albert Pujols Accused of Steroid Use: "I Know for A Fact He Was," Says Jack Clark 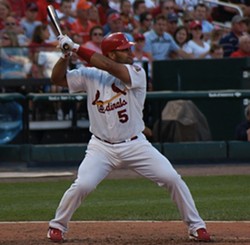 via Wikimedia Commons
Albert Pujols in 2006.

After Slaten said on-air that he long believed Pujols "has been a juicer," Clark replied: "I know for a fact he was. The trainer that worked with him, threw him batting practice from Kansas City, that worked him out every day, basically told me that's what he did."

Chris Mihlfeld, once Pujols' personal trainer, directly admitted it to him more than a decade ago, Clark said.

Mihlfeld "had told me what he was doing with 'Poolie' -- threw him batting practice, worked him out, shot him up, all that stuff," Clark said on his show, the Post-Dispatch reports, noting that Pujols' agent this week declined comment.

via
Slaten and Clark.

Mihlfeld, however, is denying these latest accusations altogether.

See also: - Albert Pujols Is "Bitter" About The Way Cardinals Handled His Departure - Cardinals Security Kicks Out Fan on Star Wars Night... For Having Stormtrooper Mask?

I haven't even talked to Jack Clark in close to 10 years. His statements are simply not true. I have known Albert Pujols since he was 18 years old and he would never use illegal drugs in any way. I would bet my life on it and probably drop dead on the spot if I found out he has. As before once again both Albert and myself have been accused of doing something we didn't do.

Why, then, is Clark making these comments?

"I have no idea. Alls I can say is that it is absolutely not true," Mihlfeld responded. "I never said those things to Jack Clark or anyone else because they never happened. That's all I need to say." 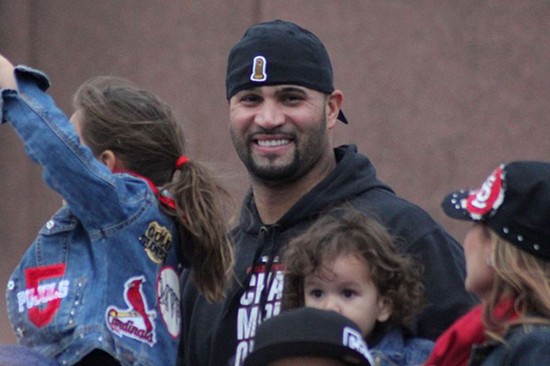 via Wikimedia Commons
Albert Pujols in 2011.

As the P-D notes, it has never been reported that Pujols failed an MLB performance-enhancing substance test or is under investigation.

In 2006, Pujols responded to the accusations, saying:

Clark this week told the P-D in an interview that he and Mihlfeld spent a lot of time together in 2000 when they were with the Los Angeles Dodgers, saying, "I had asked him about conditioning and working me out, what he would do for me, and he asked me whether I had ever thought of taking some steroids.... He just told me that he wanted me to get started on steroids and he had some other guys that were doing it. He told me that's how he's conditioning this guy that he met out of high school and college and he looked like he was going to be a star, keep an eye on him.''