via
Kevin Slaten and Jack Clark.

Pujols, as we reported over the weekend, said in a late-night statement that he will take legal action against Jack Clark, the formal Cardinals slugger who stated on-air that he knows "for a fact" that Pujols had used performance-enhancing drugs. Shortly thereafter, the bosses at insideSTL announced that Clark and co-host Kevin Slaten would both be dropped from their new show that briefly broadcast on WGNU (920 AM).

Now, Slaten may sue over the cancellation of his show. Oh, and Clark could sue, too! Or do something!

This morning, Tim McKernan, chief at InsideSTL, apologized at the top of his "Morning After" radio show:

In case you missed the drama that unfolded on Friday, a quick recap: Clark said on his new show with Slaten, "The King And The Ripper," that he knew for quite some time that Pujols had used illegal drugs: "I know for a fact he was. The trainer that worked with him, threw him batting practice from Kansas City, that worked him out every day, basically told me that's what he did." 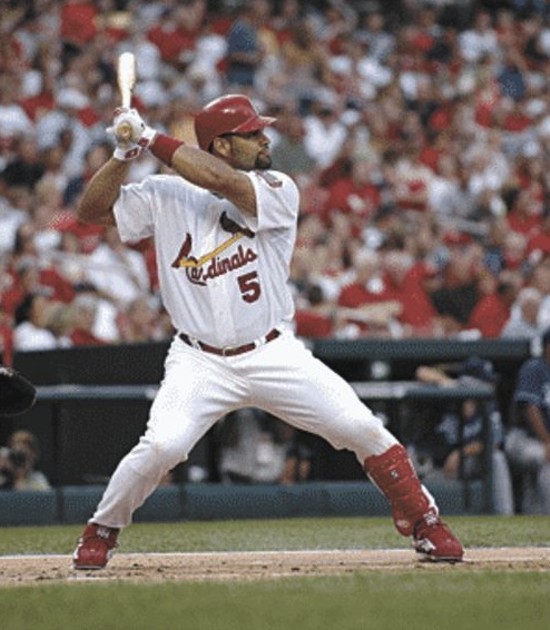 The trainer in question is Chris Mihlfeld, a close friend of Pujols, who RFT profiled in-depth in the 2006 feature "Oblique Strain," published when the first round of Pujols-Mihlfeld steroid rumors emerged. As we noted in our analysis on Friday, it's curious why Clark is raising these accusations about Mihlfeld now and said nothing in 2006 when everyone was talking about it. And, as our original cover story chronicled, the rumors around Mihlfeld were unsubstantiated and spread largely through shoddy reporting.

Both Pujols and Mihlfeld are once again vehemently denying the allegations and this time, Pujols is leveling a serious legal threat, saying, in part, "I am currently in the process of taking legal action against Jack Clark and his employers at WGNU 920AM. I am going to send a message that you cannot act in a reckless manner, like they have, and get away with it. If I have to be the athlete to carry the torch and pave the way for other innocent players to see that you can do something about it, I am proud to be that person."

Here's a statement insideSTL president Tim McKernan posted on his website on Saturday:

insideSTL Enterprises, LLC and all related companies would like to make clear that Jack Clark is no longer associated with the company. Mr. Clark was never employed by insideSTL but rather was an independent contractor. Any opinions, views or statements made by him strictly reflect his own personal views and do not reflect the views of insideSTL. insideSTL Enterprises, LLC and any related companies have never asserted and do not assert that Albert Pujols has ever used steroids or any other type of performing enhancing drug.

This followed a shorter statement posted on Friday that said only, "Jack Clark and Kevin Slaten are independent contractors, and we want to make it clear that the opinions expressed do not necessarily reflect the opinions of insideSTL Enterprises, LLC."

It's been a rocky few months for Slaten. As we reported in July, he parted ways with Insane Broadcasting where he was on-air with Bob Romanik; he planned to start a new show with Clark at insideSTL.

via Wikimedia Commons
Albert Pujols in 2011.

The two only did seven shows before the steroid story erupted and their higher-ups dropped them.

Now he is planning on suing.

"I don't know what Albert Pujols' damages are, but there are a lot of damages for me," Slaten told the Post-Dispatch. "Albert Pujols didn't even mention my name. Why does this fall on me?"

Slaten elaborated to Dan Caesar about his conversation with McKernan:

Slaten said McKernan told him, "'I know that, but everybody associated with the show has to go.

"This one blind-sides me like no other," he said. "I thought McKernan was different, but he's not. He's as cowardly and slimy as the rest of them and he lies."

Meanwhile, Clark -- who Daily RFT left a message for on Friday -- says he is considering taking some action, too.

According to the P-D, he says, "I stand by what I said. I'm not sure what I'm going to do, but I'm doing something for sure."

He also offered these tweets:

I completely stand by the story i told 8 days ago about conversations 13 years ago w/ Mihlfeld. He will never admit it. Google it.

Pt 2 i never accused verlander or green of PED use. If u didn't listen to show u don't know. PERIOD.