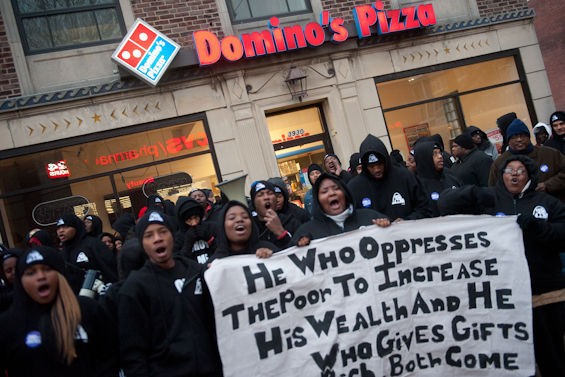 Jon Gitchoff
St. Louis fast food workers and their supporters have protested low wages for years. Here they are demonstrating in December 2013.

There's a lot to unpack here, and the talented folks over at St. Louis Public Radio (90.7 FM) and the St. Louis Post-Dispatch have both offered detailed articles on what this means for the future of the city's minimum wage.

But there's one item we couldn't help but point out ourselves: That despite Vaccaro's opposition to a city minimum wage hike, we already know he's fine with some types of wage increases -- that is, as long as the extra cash could benefit his wife.

Earlier this month, Vaccaro was busted by Post-Dispatch reporter Nick Pistor for quietly sponsoring a bill that would create a bonus system for employees in the Recorder of Deeds office, where his wife has worked since 2011.

The bill -- which would replace one passed in 2012 -- seems shady: The details of the bonuses are buried in a sixteen-page pay bill, the kind of city legislation that usually follows a rote structure and receives little scrutiny from other aldermen. Vaccaro's bill would grant Recorder of Deeds Sharon Carpenter wide leeway distribute bonuses for things like gaining additional accreditation or training, as well as creating an "Employee Suggestion Program" that "grants cash and other awards to recognize employee suggestions, which improve Recorder of Deeds office services or operation."

That last bit raised the suspicions of longtime Recorder of Deeds whistle-blower Marie Ceselski, who theorizes that the bonuses and "suggestion program" are simply another way for Carpenter to police her staff's political loyalties and reward those who have her back. The pay bill would also create new office positions, possibly to accommodate the recent part-time hires of relatives of Aldermen Freeman Bosley Sr. and Alderwoman Beth Murphy.

In fact, Vaccaro admitted to the Post-Dispatch that Carpenter's office had actually authored the bonus-packed pay bill.

Vaccaro's ties to Carpenter, who lives in his 23rd Ward, run deep: The alderman didn't abandon Carpenter when she was forced to resign her office in 2014, after it was revealed that she violated the state's nepotism statute. (Vaccaro, it should be noted, disputes that he did anything wrong in backing the pay bill. He has since removed himself as the bill's sponsor.)

The upshot is that Vaccaro has been willing to push pay increases for Carpenter's loyal foot soldiers, even though Carpenter appears to have few limits to her sense of entitlement. The city's minimum wage workers are a much different story.

Here's how Vaccaro defended his decision to kill the minimum wage bill, which he says was rushed to committee and didn't stand a chance of being properly vetted before the Board's July 10 summer break deadline.

And here's Vaccaro giving reporters the business after Friday's Board of Aldermen meetings.

The video shows an alderman playing the part of the statesman, the measured voice of reason, and he's certainly not alone in advising caution when it comes to raising the city's minimum wage.

Talk about a contrast.

So when it comes to Carpenter and the Recorder of Deeds, Vaccaro will play the dutiful errand boy and sponsor a bill that would funnel more power to one of the city's shadiest and most embattled public officials -- and more cash to workers like his wife.

But when it comes to allowing open debate and study on a minimum wage hike for the city's workers? That's when Vaccaro's conscience suddenly steps up to say hello.