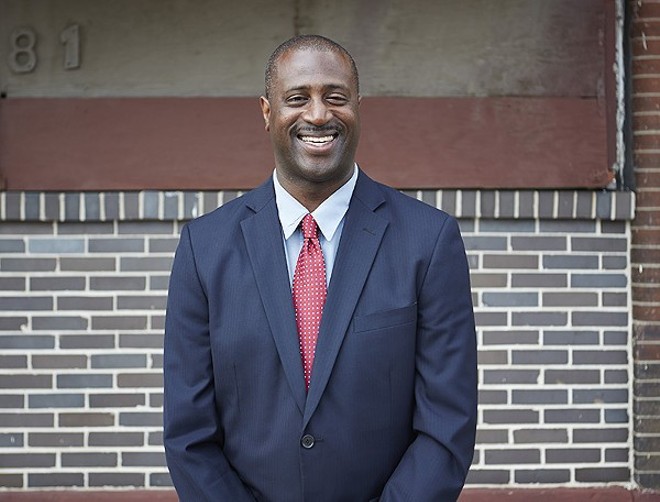 THEO WELLING
Alderman Jeffrey Boyd.
St. Louis Treasurer Tishaura Jones has a famously toxic relationship with Alderman Jeffrey Boyd. The two have run against each other (for mayor, in 2017), and on top of that, he's suing her over the city parking operation she controls.

But even so, Jones wasn't prepared for his reply to an email she sent last week — taking issue with the fact that she'd sent her response to his city-issued email address.

Boyd insists there is nothing untoward about his preference for an sbcglobal.net email address over stlouis-mo.gov. He's hardly hiding it; he puts the personal address on his aldermanic business card, he notes. And he argues that his emails would remain accessible to the public via the state's Sunshine law, regardless of which account he's using.

The law seeks to ensure that public officials' communication be open to the public. If a reporter asks for emails written by a city official about city business, they're supposed to be able to obtain them. Boyd says that would be the case for his personal account.

"Do you remember Sarah Palin?" he asks. "Sarah Palin used her personal email for government business, and she had to give up every email that had to do with official business." He says he would do the same: "There's no reason for me to want to subvert the Sunshine law. I believe in the Sunshine law."

But by moving city business to a personal email account, Boyd may be doing just that, says David Roland, director of litigation for the Freedom Center of Missouri and a frequent thorn in the side of government bodies trying to conceal official records.

Legally, Boyd is not equivalent to an executive branch staffer like Palin, Roland explains. And that means emails from a personal account would not necessarily be public record.

That's even though email messages from a city account are public.

Beyond that, there are questions of retention, and production. As Boyd acknowledges, a journalist (or gadfly) seeking his personal emails wouldn't get carte blanche.

"You'd have to be specific," he says. While he accepts that some constituent emails might be fair game, he says many constituents are friends — and he wouldn't turn those emails over in response to a Sunshine request. "If we're planning a birthday party for my constituent's grandmother, I don't need you knowing what we're talking about. Now, every email I've ever sent to a city department, I'd give you those." But while some culling is normal in records being produced under the Sunshine law, the fact Boyd himself would be doing the culling as opposed to a city records custodian also raises complications.

City Counselor Julian Bush says he is not aware of ever being asked if it's OK for aldermen to use personal emails for city business. He's not sure what the answer would be.

But Boyd, for now, is insistent that his system is OK. "I dot my 'i's and cross my 't's," he says. "I'm a rules person. I'm a military man." Then he changes the subject to criticize the city treasurer's parking division management. "Why is she above the law?" he asks.