Alderwoman Accused of Stealing Body Bags Has A Political Problem Too 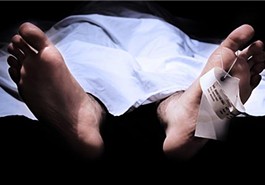 Image source
A symbol of Donna Myers' political career?
Remember Donna Myers, the supervisor for the St. Louis County Medical Examiner who was arrested for stealing body bags from the office (along with cleaning supplies and a corpse's diamond earring) and re-selling them to local funeral homes?

Well, Myers lost her job in April shortly after police booked her for the thefts (she pleaded not guilty) but it turns out she's still employed as an Alderwoman in Centreville, Illinois. Well, at least for the short term.

See, when Myers was arrested she gave police a different address than the one she lists on her voter registration card. And since the address is outside of the ward she represents, some of her political rivals have pounced.

Myers listed her address during her City Council campaign in 2009 as 5125 Nelson Ave, located in Ward 3 of the city. Turns out that home belongs to her mother.

Myers told police that she actually resides at 615 Mousette Lane, in Ward 4. Property records show she purchased that home in 2008.

According to the Belleville News-Democrat,  the woman who lost to Myers last year is calling for opponent's resignation. Trouble is, Illinois election law doesn't cover conflicting addresses, meaning Myers may not have broken any rules.

An attorney for the Illinois Board of Elections said the state's laws regarding residency do not directly deal with removing anyone from office, even if it can be proven that a residency law was violated. That's up to a circuit court judge, said election lawyer Bernadette Harrington, who added that a citizen, officeholder or candidate must seek legal intervention to enforce residency laws, an often expensive process.

The only way short of a circuit judge's order is to file an objection during a short window of opportunity when a candidate's nominating petitions can be challenged by taking a complaint to a local or county election board, she said.

Myers is scheduled to appear in court for the theft charges on June 24.