ICE Ordered Alex Garcia to Report for Deportation. He Took Sanctuary in a Maplewood Church Instead 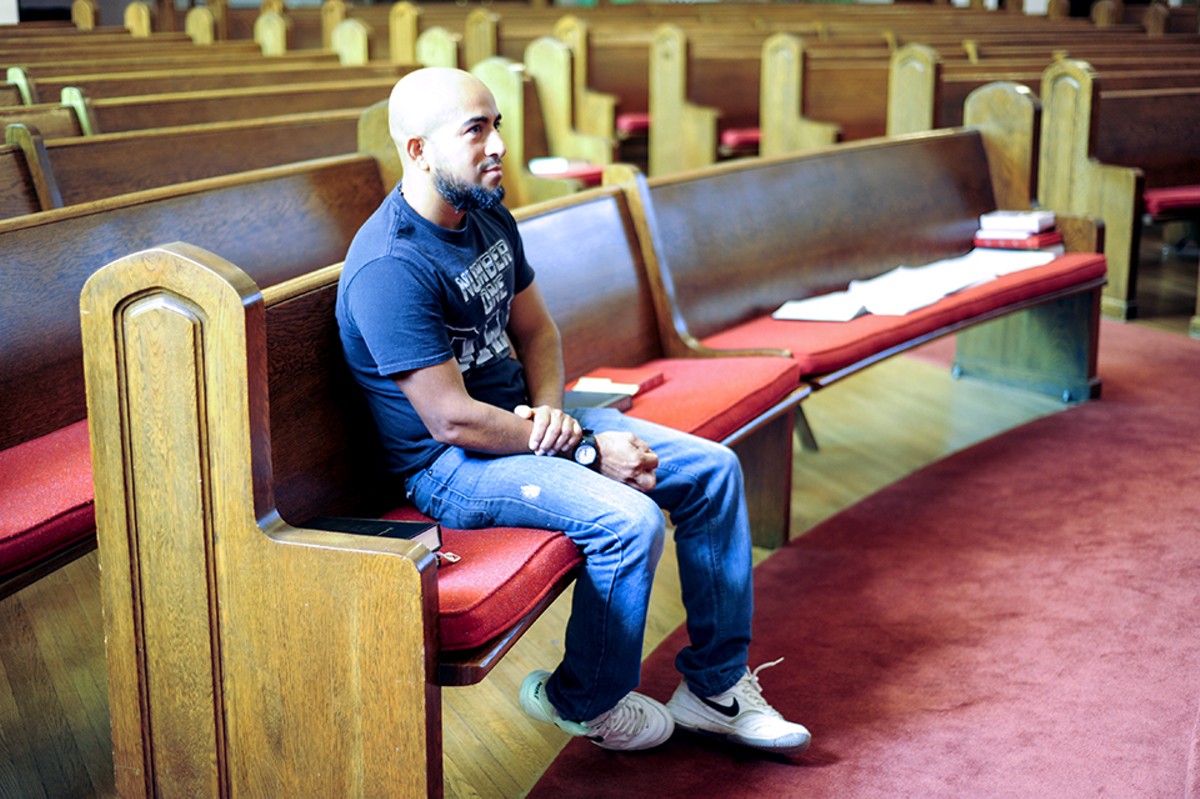 KELLY GLUECK
"The longer you do good, don't harm nobody, you'll be OK," Garcia told himself.

Questioned by the Riverfront Times, an ICE official confirms the agency does have plans to deport Garcia, but that agents won't arrest him as long as he stays in the church. They're now locked in a standoff, with Garcia unwilling to go out, and ICE agents unwilling to go in.

A base-level tension hangs over the situation, but most days in the church are low on drama. Garcia might listen to the radio for a bit in his makeshift quarters after waking up. (He regularly tunes in to Sean Hannity, although he concedes the conservative commentator would not approve of his situation: "No, he would not agree.") And then he starts whatever project he has selected for the day. The old church has seen plenty of wear and tear in the past century, and Garcia scans every surface as he makes his way through the building. On a recent morning, he works his way down an interior hallway, scraping, sanding and painting a dozen doors within a few hours. He wears a NUMBER ONE DAD shirt, blue jeans and a wooden rosary that some visitors to the church gave him recently.

Turner has made it clear he is under no obligation to do anything, but he says he cannot just sit around all day. If he thinks about his kids too much, he will start to cry.

"It's hard when the little one says, 'Dad, why you don't go home with us?'" Garcia says.

He was nineteen when he first tried to cross the border from Mexico into the United States. Born Rene Garcia Maldonado, he says he grew up in the countryside of Honduras without electricity. The closest town was a two-hour walk.

Originally, he thought he would make some money up north and come back, but Border Patrol agents caught him shortly after he crossed the Rio Grande. That was in 2000, and a federal immigration judge signed an order expelling him from the U.S. There was not even a hearing.

He tried again around 2004, and this time he did not get caught. He quickly hopped a northbound train, unsure where exactly it was headed. When it dumped him out in Poplar Bluff, he remembers it was raining.

"I got off the train and started walking, seeing what I could find," he says. On his first day, he landed a job as a dishwasher at a Mexican restaurant, where he worked for seven years before going into construction.

In the early days, he says, he still planned to return to Honduras. But he soon began to assimilate into the Poplar Bluff community. He dated a local woman, and they had two boys before the relationship ended. He started dating his wife a decade ago. She also had a son from a previous relationship, and when they got together, they meshed their families together. Now married seven years, they've added another boy and, finally, a girl.

In 2013, Garcia and his wife contacted Cortés to try to get him citizenship.

As Cortés looked into Garcia's case, she soon discovered bad news: The 2000 immigration deportation order was still in effect. A DWI from 2008 was the only mark on his record, but that 2000 expulsion for border crossing effectively killed any chance of obtaining legal status, Cortés says. It did not matter that his wife and kids were all natural-born citizens.

For awhile, everything was still fine. The family did have a scare in 2015. Garcia's sister had also crossed into the United States, and he decided to accompany her to a scheduled immigration check-in at an ICE satellite office in Kansas City. He had originally planned to just stay in the car, but the location seemed a little sketchy so he escorted her.

Cortés says that was a mistake. ICE agents questioned Garcia and eventually identified him from the 2000 order. Before he knew it, he was being detained.

He was locked up for two weeks before Cortés was finally able to persuade ICE officials to grant him a stay of removal. To make her case, she included signatures and letters from hundreds of people as well as medical records for his son, demonstrating the ongoing need for Garcia to remain in the country.

COURTESY OF ALEX GARCIA
Garcia with his wife, Carleen, and five children.

She was able to get another year-long stay using essentially the same argument in 2016, but things had changed when she tried again in 2017. Under Trump, stays are much more rare. Even if they're granted, they tend to be for shorter amounts of time, 30 days or six months as opposed to a year, according to the agency. An ICE official says the recent policy changes and the more sweeping nature of arrests is basically a return to pre-Obama enforcement directives.

There is some truth to that, says former federal prosecutor Javad Khazaeli, but the Trump-era changes go much further than Bush ever did. Now in private practice in St. Louis, Khazaeli worked for the Department of Homeland Security under George W. Bush and Obama. He says prosecutors previously had discretion to go after the most dangerous people. The idea was to focus their limited resources on terrorism and violent crime.

"I'd rather go after the child molester than the 80-year-old Guatemalan grandmother who has no criminal record," he says.

A guy like Garcia would have gotten a look under the old policies, Khazaeli says, but it is unlikely he would have ever become a priority for removal once it was determined he was not a threat.

"What the Trump administration has done has totally changed that," he says. "What I think they're doing is trying to increase their statistics."

After all, it is a lot easier to find and arrest people who are already checking in than to hunt down a gang member living on the fringes.

"The downstream effect of that is now you can't put as many resources to go after people who are actual threats to national security," says Khazaeli, who sent an inquiry to ICE regarding Garcia at Cortés' request. "I think we're significantly less safe because of this."

In the first 100 days after Trump's executive order, ICE arrested more than 41,000 people confirmed or suspected to be in the country illegally, a 38 percent increase over the same period in 2016. That translates into more than 400 arrests every day. And while nearly three-quarters of those arrests are of people with criminal records, the number of those arrested without criminal records is surging.

The proof is in the stats for non-criminal arrests during the first quarter of 2017. Busts spiked to 10,800, more than double the 4,200 recorded the previous year.

None of that is good news for Garcia, who is hoping immigration officials will look beyond his legal status to all the positive things he has done — and the harm his deportation would do to his family. He thinks that should count for something. Whether it will is up to ICE.

All Garcia can do is wait. He spends his days biding his time, trying to be useful, waiting for a reprieve that may never come. He and Carleen have told the two youngest children he is just working at the church. The three older boys know vaguely that his absence has to do with immigration, but they do not fully understand. Garcia does not quite understand it himself. Like anyone without legal status, he always knew there were potential consequences, but considered the possibility remote. He had followed a code over the years to assuage his fears.

"The longer you do good, don't harm nobody, you'll be OK," he told himself.