All Aboard: No Pants MetroLink Ride Is Tomorrow 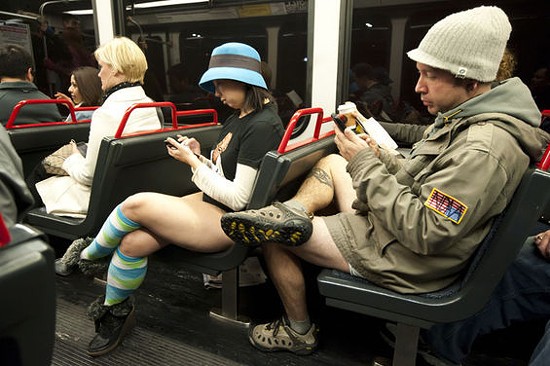 If you've ever gotten onto the MetroLink, looked around and thought to yourself, "I wish there were more bare bottoms in here," this is your week.

"I want public transit to be more of a fun place to be, not just functional," says Mallory Nezam, founder and executive director of STL Improv Anywhere. "We love to mix up the everyday. I think it's really good for the spirit to stay on your toes and see some magical and inspiring things."

No Pants riders will board the MetroLink at 6:35 p.m. at the Skinker Blue Line stop after a quick team huddle at Kayak's Coffee. From there they'll head to the Scottrade Center, where the St. Louis Blues are taking on the Phoenix Coyotes, before heading to the Convention Center exit for an after-party after 7 p.m. at Pi Pizza.

Nezam is adding a small twist this year, asking riders to part with their pants during the ride, not before they board, promising new levels of confoundment for commuters. The more absurd the situation, the more people let their guard down and connect, Nezam says.

"Through that vulnerability and absurdity, you start to create bonds with people and make a lot of friends with strangers on the ride," she says.

Want to get on the No Pants MetroLink ride? Bring $3 for a ticket and meet at Kayak's Coffee at 6 p.m.