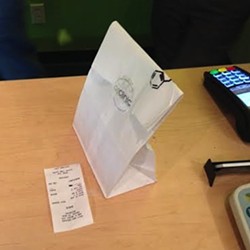 Continue reading for four reasons we're hella jealous. Prices aside, we are totally jealous of Colorado ending the marijuana prohibition, and here's why:

1. We want to be strain snobs.

eggroll on flickr
Oh, you smoke Sweet Tooth? How gauche. We only use Sour Diesel.

Grape Skunk. OG-funky Grunk. Shakedown. Sweet Tooth. Choosing a marijuana strain in Colorado is like discriminating among bean options at a fancy coffee shop. We wanted to make fun of Breathes for complaining that there are "only five strains" in the newly- pened marijuana dispensaries while we in St. Louis smoke the same ol' schwag, but we have to admit it's just sour grapes.

2. Dispensaries take the shame away.

Anyone who's had to put up with meeting a sketchy dude in his car just to buy an eighth knows how disgusting it sometimes feels to buy drugs on the black market. Breathes describes the dispensaries in Colorado as "clean, Apple Store-meets-Whole Foods," which sounds like the opposite of a back-alley deal. "Next to me," writes Breathes, "a really young-looking dude from New Jersey with his girlfriend said it looked like a miniature car wash for weed."

3. Waiting hours for legal weed seems worth it for high quality.

Sure, Breathes and other Colorado weed customers had to wait hours to get their goods, but the quality of the newly legal offerings seems stellar. Now that the plants are legal, green thumbs are turning marijuana cultivation into an art form. "The buds of Sour Diesel I brought home were ripe and well-developed," Breathes wrote, "with a coating of amber trichomes across them and a smell that is probably still putting a smile on the face of those customers used to scraggle scraps from a third-hand middleman." We're still getting scraps here in the Lou.

4. We want to try the samples, like a Sam's Club for kush.

Our childhood memories are full of glorious trips to Sam's Club where we could eat all the samples of pizza pockets and meat sticks we wanted. Colorado has taken this to a whole new level, with disposable e-pens full of hash oil and an assortment of cookies and candies out for sampling.