Did the sweeping music of the All-Star game's opening ceremonies lull you to sleep? Did the "All-Stars Among Us" video bore you to tears, or just cause you to change the channel? Did all that talking by MC Joe Buck aggravate you? If so -- but you still want to catch up on a bit o' baseball history that happened right here in St. Louis tonight -- here's your rundown, courtesy of a television that's older than the American League's winning streak.

Ryan Franklin and his beard are introduced.

Some of the "All-Stars Among Us."

President Obama -- who narrowly lost Missouri in the 2008 general election.

There's the President. What jacket will he be wearing during the first pitch? 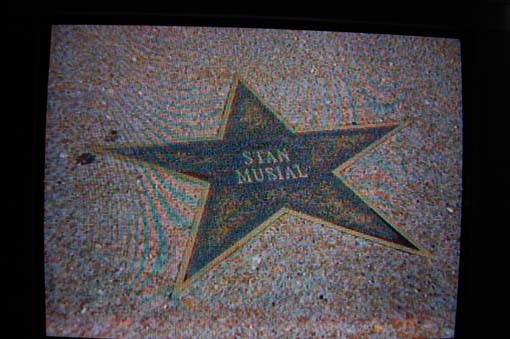 The Delmar Loop, and Stan Musial's star gets a cameo.

Stan Musial rides out in a customized Mercedes-Benz golf cart and shakes a baseball at the cheering fans.

Out comes the President to about half-boos, half-cheers. Maybe it's for political reasons, or the fact he's wearing a White Sox jacket.

Obama lines up to throw out the first pitch.

A replay of Obama's first pitch wraps it up. And we're onto the game!