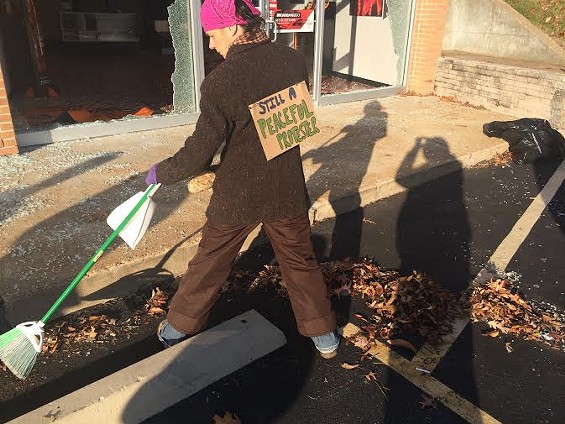 Courtesy of Charles Wade
Alternative Spring Break volunteers will help with clean-up and beautification efforts, as well as other volunteer opportunities, in Ferguson.

Unless they took time off coursework, college students across the country haven't had an open opportunity to travel to Ferguson and join protests and rebuilding efforts.

The fatal shooting of Michael Brown that started it all happened in August, just before classes started at colleges and universities. The grand jury's decision not to indict then-Ferguson Police officer Darren Wilson -- and the riot that followed -- came down just before their Thanksgiving break. Even the Columbus Day protests scheduled in October coincided with midterms for many students.

That's why activist leaders are organizing an "alternative" spring break, aiming to bring 50 to 100 students from St. Louis and across the country each week for three weeks to volunteer, rebuild and continue the healing process in Ferguson.

See also: Volunteers Clean Up at Ferguson QuikTrip, Get Yelled At for "Helping the White Man"

Wade, who was a residential advisor for freshmen at New York University as a senior in 2003/4, says he wants to give college students a way to plug into Ferguson without acting like tourist looky-loos, driving by the teddy bear memorials on their way out of town, or getting into dangerous situations during protests. Wade says he hopes the students' service will remind Ferguson residents that they aren't alone.

"When you have a person extend a gesture, getting on a plane and coming 3,000 miles, when you have someone get in their car and drive ten hours, there's something warm and fuzzy about that," Wade says. "When you say, 'The whole world is watching, the whole world cares,' it's not just hyperbole. It's the truth."

The alternative spring break builds on other programs in the U.S. and around the country that offer volunteer opportunities to students who want more out of their spring break than a hangover and a tan.

"These are young, talented folks, and that's what they're coming to town for, to be of service," Wade says.

Students will start with service work, helping overwhelmed businesses with beautification, stocking, taking inventory, upgrading computers or any other necessary task. It's important work in Ferguson, where the library is overrun with new donations and businesses are still cleaning up after six months of unrest.

"There are a lot of businesses who've been waiting for help," Wade says. "They need people to say, 'Yeah, we'll unpack those donations so you have time to do inventory.'"

Wade also plans for the students to do voter outreach in Ferguson, registering voters and educating them on how municipal elections affect lives.

"A lot of people get gung-ho about November elections, and they don't care about April," when local officials like mayors and city councilors are elected, Wade says.

Students will also learn some of the lessons protesters have realized over the last six months, such as how to be a legal observer during demonstrations or how to document police activity. But alternative spring break is not Protester Boot Camp 101, Wade says.

Wade says he wants to enlighten students on the issues protesters have faced since August and give them tools to continue advocacy -- Ferguson-related or otherwise -- in their own cities.

"Its not just about Black Lives Matter protests," Wade says. "These are active students. At this point, you would need to have a legal observer at any rally. You need to have that, given the climate."

Even if the students don't become legal observers, who monitor protests for human rights violations, at least they'll know what it means to be one, Wade says.

Wade says he hopes students leave alternative spring break empowered and enlightened. "Having them go through this training is a way for them to be enlightened about the full scope of the things they've been watching."