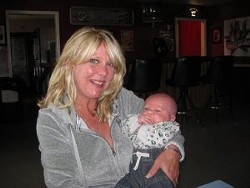 Potter and her son, Wyatt.
A Lake Saint Louis woman accused of passing out drunk in bed last November and, in so doing, suffocating to death her sleeping six-week-old son won't be charged with felony child endangerment.

St. Charles County prosecutor Jack Banas decided to drop the charges after a grand jury decided to not indict 41-year-old Alyssa Rae Potter for the crime.

Potter called police November 19 around 1:40 p.m. November 19 after waking up to discover her son Wyatt lying beside her and not breathing. Initially Potter told authorities she'd had a glass of wine before taking a nap with the child. 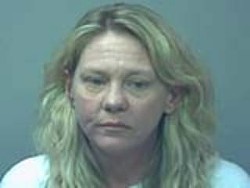 Potter's mugshot.
That figure was later bumped up to three or four glasses of wine. But was it more like three to four bottles? A blood sample taken four hours after Potter called police revealed she had a blood-alcohol content of .20 percent -- a level that can lead to "stupor, unconsciousness and black outs."

That news greatly pleased Potter's attorney, who told the Post-Dispatch yesterday that Wyatt's death was "terribly unfortunate" but did not constitute a crime.