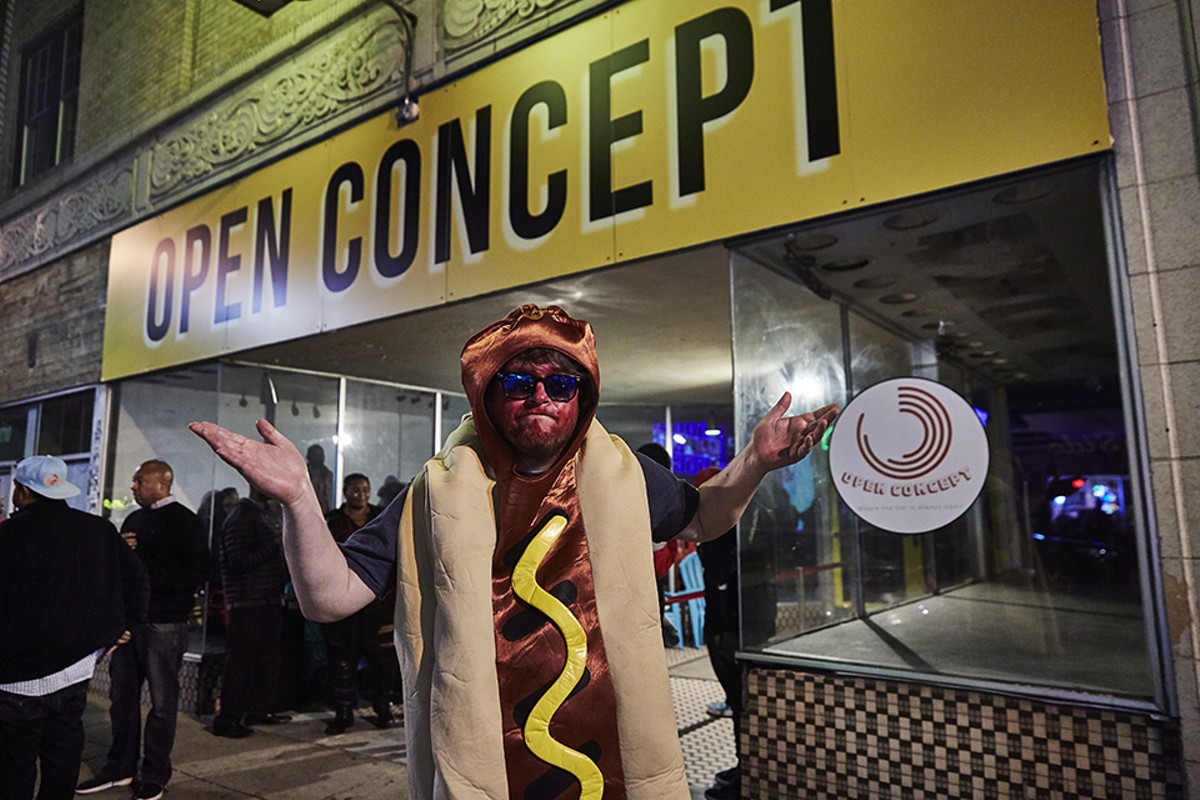 THEO WELLING
Our preliminary analysis: Hill, still undercover as a human hotdog, was just fine without that final Bud Select.

With all of this data coming from various boozy experiments at venues across town, you would think that I'd be zeroing in on a conclusion. But something stuck in my craw about my visit to Open Concept. Namely, I realized it is completely impossible for me to confidently put forth my experience as one that could serve as useful to the drinking public at large, on account of the fact that I was shamefully made as a reporter due to my own foolish actions on social media.

But what could be done? I'd typed my name out on an iPad when I created my bar profile during that visit — I'd even been addressed by name by the owner himself. On top of that, it seemed unlikely that staff would forget the face of the man personally cut off by their boss when the bar was virtually empty, especially given that a return trip would have to happen less than two weeks after the first in order to make deadline. How could I properly continue my research when I'd be so easily outed as a media spy?

Luckily, the entirety of my experimentation was occurring in the latter weeks of October, in the run up to Halloween, a.k.a. the only time of the year that it is socially acceptable to go out in public wearing a disguise.

I decided that a return trip was absolutely mandatory, and planned it for a Friday night, when the bar would presumably be most bustling, allowing me to more properly blend in.

Perhaps antithetical to fitting in, but imperative for concealing my identity, I also decided that I would complete this visit clad in a hot dog costume that I'd purchased for Halloween a couple years ago, with a shapeless drape to conceal my memorably enormous body and red face paint in order to properly prevent me from being recognized. I showed up with my designated driver and two other accomplices, all of us dressed in costumes in order to further throw staff off of my scent.

We arrived at 7:40 p.m. to a dramatically different scene than the one I'd experienced on our first visit. The bar was packed wall to wall, with dimmed lights and more of a club vibe, accentuated by the occasional bottle set on tables that looked as though they'd been reserved in advance. A DJ played a mix of R&B and hip-hop in the corner while the bar's patrons danced and mingled throughout the space. One large projector played what looked to be a Die Hard movie, while a second was used by patrons to play Mortal Kombat. It seemed more likely I'd be able to fly undetected here, in spite of the ostentatious nature of my costume.

But then, trouble came. At the door checking IDs was none other than Butler himself, along with Bosley, the same staffer that had so kindly brought me Pedialyte on my first visit. It seemed extremely unlikely that I'd be able to gain access to this building without either of them figuring out who I was — I'd spent a fair amount of time speaking with both of them. I was surely doomed before I even stepped foot in the door.

My fears seemed confirmed when Butler pointed at me, my eyes locking with his behind the identity-concealing sunglasses I was wearing indoors and at night. But rather than the "gotcha" that I expected, Butler then pointed me to Bosley and indicated that I should go to her to check in (he was at that time contending with a line). I stepped over to Bosley, all but holding my breath while she looked at my ID, certain I was made. When it was time to enter my name into her iPad, I crossed my fingers and typed "Dan Hill" into the field, hoping against hope the omitted "iel" would provide just enough cover to slip in undetected.

To my great surprise, my gambit paid off. I was promptly ushered through the front door and into the venue — where my accomplices and I were literally the only people in costume — with no mention of my previous visit. I immediately headed to the bar.

In this setting, Open Concept's business model began to make a lot more sense than it had on my first visit. The line for the bar was long, but moved fairly briskly, as the bartenders did not have to contend with the payment process of the bar experience, instead just doling out drinks in exchange for the customer's name. At the same time, the line was just long enough that, in order to manage the high rate of consumption I had enjoyed during the first half-hour of my initial visit, I'd need to spend my entire time standing in line, then immediately file to the back again upon being served. That prospect seemed both untenable and wholly unenjoyable.

When I got to the front, I resumed the drink-everything-on-the-menu mission I'd been forced to abandon before. Next on the list was a whiskey sour, followed by a Manhattan, an Old Fashioned, a lime Margarita and a gin and tonic. All tasted as expected. I also doubled back and got that Vess and Vodka I'd been unable to try last time due to it being out of stock — turns out I was right in predicting it would taste like clear liquor and generic soda. I finished those drinks over the course of an hour.

There were no unoccupied tables, so I was a little concerned that I might be dubbed "visibly intoxicated" more easily than if I was sitting. But whether due to my sure-footedness or the staff's inattention, it didn't come up during my first hour. I prefer to think it was the former.

Butler moved throughout the bar, walking within inches of me on more than one occasion. Each time I turned my bun-clad body away so as to avoid being detected. Meanwhile, Bosley remained on door duty, so I avoided going near the door.

One of my accomplices — the RFT editor who had accompanied me on my first trip — did not avoid the door, though, and she was soon made. Bosley recognized her — in a costume that was spare and mostly involved a wig so as to change the appearance of her hair — when she pointed out a spill to staff, with safety being her concern. She then texted me that she had been spotted and said she'd avoid standing by me so I hopefully wouldn't suffer the same fate.

Meanwhile, the time I paid for ran out. Convinced that I would be easily outed as that troublemaker from before, I'd only bought one hour for this go-around. Worse still, additional time had to be purchased from Bosley up front. The fact that she'd been stationed there throughout the night rather than at the bar had played to my advantage, as I had only interacted with her one time, rather than several as with the bartenders (though I was also strategically going back and forth between bartenders throughout the night so as to minimize my face time with any one of them). Especially after my associate was made, the need to purchase another hour could easily be my undoing.

But again to my surprise, it wound up not being a problem. I bought another hour undetected and headed back to the bar, where I was now onto the wine portion of the menu. I did not enjoy the cabernet or the moscato, that section's only two beverages, but I'm not a wine guy. The beer section was next, comprising Bud products. I liked the Budweiser more than the Bud Light, obviously, but to be honest, I don't like either of them.

This brought me to the very end of the menu — my hard-fought victory in sight, just over the horizon, only a Bud Select (gross) standing between me and triumph.

But then, as I waited in line once more, I got a text from Open Concept: My time was up. That last hour had flown by, and if I was going to drink the entire menu as I'd planned, I'd need to purchase yet another.

I decided not to. It's interesting, and sort of a testament to Open Concept's business model's self-policing nature, that I opted not to plunk down another $10 just to achieve my goal. Were this Just Bill's, I would definitely have bought a final beer, just to say I'd finished the whole menu. Hell, even in the throes of gastrointestinal distress at Applebee's I'd still at least ordered a tenth drink, even though I didn't touch it. But $10 for a fucking Bud Select? There's no way in hell.

My accomplices and I headed out into the cool October night upon completion of our mission, red face paint running into my eyes and foam hot dog bun on my back. My designated driver delivered me safely to my home, where my portable barbecue grill thankfully went unused.

$50.14 (I'd been unable to tip on my first trip, as I'd bought my time online in advance and had no cash, so I overtipped dramatically on this visit.)

In total, I consumed 38 alcoholic beverages in four trips to three venues over the course of nine combined hours, and if there's one main conclusion that can be drawn from my experience seeking out the thriftiest buzz in town, it is this: Applebee's is poison. Do not drink their dollar drinks. For the love of God.

Aside from that, I fail to see what all the fuss is about regarding Open Concept. When compared to a traditional bar, or even a chain restaurant, its all-you-can-drink model ultimately ends with roughly the same number of beverages consumed — and that's when a person is even deliberately stress-testing it. At no point in time, during either trip I made to the bar, did I see anyone that looked to have been overserved. Honestly, I was probably the drunkest person in the building both times — and I wasn't even that drunk.

I mean hell, I bet I could have drunk the whole $20 side of the menu in one sitting if I'd really tried. Bartender?


Daniel Hill is the RFT's music editor and resident alcohol enthusiast. Follow him on Twitter at @rftmusic.