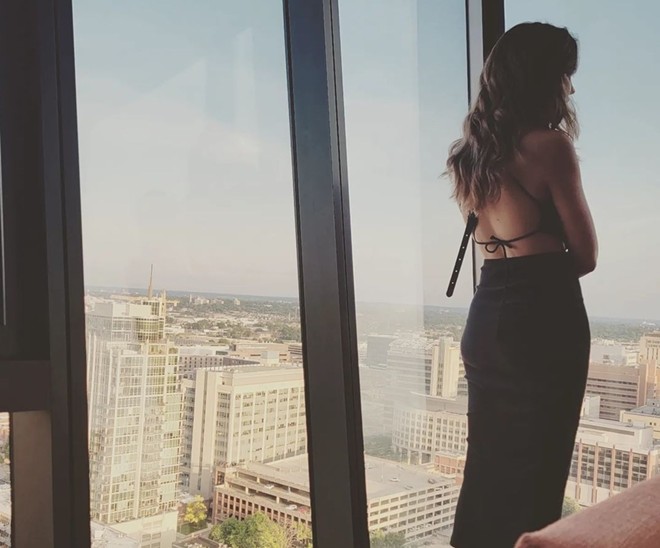 CHRIS ANDOE
The view from Choinski and Jewett's apartment.


On the 31st floor of 100 Above the Park, the striking origami-like sculpture dominating the Central West End skyline, exiled Bostonians Tom Choinski and Steve Jewett hosted a party in their fashionable corner apartment.

While St. Louis’ social scene is known to be challenging for outsiders to navigate, Choinski says joining an organization was the secret to his success. “My experience in the gay men’s choral movement in other cities told me joining the local organization would be an instant ‘starter kit’ for your first 50 new friends and acquaintances. It was no different here. We’ve moved on since then, but the connections were made. And finally, meeting an interesting person begets meeting more interesting people. We’ve been very fortunate in that respect.” 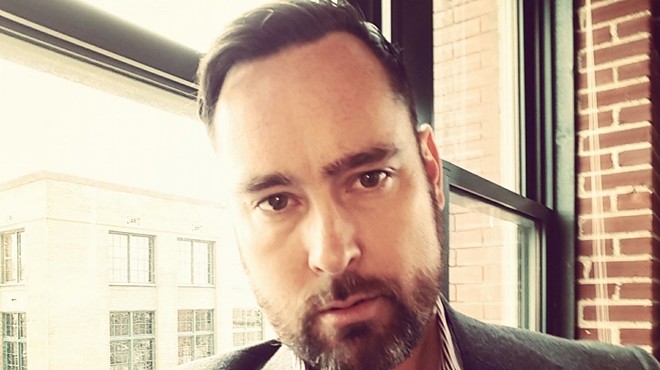 One regular at Choinski and Jewett’s curated soirees is Londoner James Frey Croft. The Harvard graduate came to St. Louis in 2014 to complete his training as an ethical cultural leader with the Ethical Society of St. Louis, and extended his stay after getting involved in the Ferguson uprising. He is returning home in December. Besides occasionally running across him at South Broadway’s Bar PM, where his husband performs drag, I only spend time with him at Choinski and Jewett’s parties, and I’ve enjoyed many lively discussions with him. For instance, I remember when the Brit once scoffed when I described Cahokia Mounds as “ancient.”

“Ancient?” Croft exclaimed. “They’re not even that old!”

We can sometimes forget that 1,000 years isn’t that noteworthy outside of the Americas, but I was remiss in not mentioning that in 1250 our Cahokia was larger than London.

For his part, Choinski likens St. Louis to Rome around 600 B.C. “The city has a large footprint, but its population has shrunk. It’s a village inside a city. It’s no coincidence I run into the same people all the time like a badly written soap opera.”

Guests, who ranged in age from 30s to 60s, also included “Maven of Mardi Gras” Luann Denten, who was on our January 29, 2020, cover (Choinski and the Maven are also in my latest book, House of Villadiva). The Maven’s always-busy Vices & Virtues Mardi Gras Krewe, in partnership with St. Louis Barcycle, had just hosted a Historic Soulard Brewery Tour.

Every St. Louis neighborhood has its own unique flavor, which I find endlessly interesting. Much of the Central West End is uncommonly cosmopolitan and transient, as demonstrated by Croft and by the hosts, who will return to Boston in just over a year.

On the other end of the spectrum, we have neighborhoods like Soulard, which certainly has a new transient component with the recent construction of so many upscale rental units, but is largely controlled by entrenched stakeholders with simmering rivalries and feuds that are always bubbling to the surface. For example, a guest mentioned that when the owner of St. Louis Barcycle announced at a community meeting that his business contributed to the Maven’s Vices & Virtues 501(c)(3), the president of a neighborhood organization, who is not a fan of hers, reportedly booed.

Croft asked what I was working on, and I announced I would be writing a society column in the RFT. “Do we have society in St. Louis?” he quipped.

“We are dining atop a skyscraper, so I think this counts,” I replied.

Implied in the question is if we have enough interesting people to cover, and for me that answer is a resounding yes. We are a city of characters and backstory, with social dynamics similar to other deeply rooted places like Charleston or Savannah, but also with fresh and vibrant scenes like the Grove and the Cortex Innovation Community. My aim is to highlight the region’s most intriguing people and to bring the reader along as my plus-one to the most fascinating cocktail parties and events.

I’m a native of Oklahoma. I thrived in San Francisco for eight years, was chewed up and spat out by New York in a matter of months, and have lived in St. Louis three times since first coming here in 1997 — continually pulled back to this complicated place that I call my muse.

One California evening, I was scrolling through social media and longingly looking at posts from all my wonderful St. Louis friends at big gatherings in homes and gardens. Entertaining in the home is less common in cities where people live in smaller spaces, and was something that I missed, along with the sense of community and tradition. I wrote the following in my journal: Some people feel like they are wasting their lives because they’re in St. Louis. I feel like I’m wasting mine because I’m not. This place has a profound culture, and I yearned for it when I was away. Enough of an insider to know what's going on, and enough of an outsider to know why it's interesting, my goal is to make others see our culture and love it a bit more.

And even for those like my Bostonian friend who see St. Louis as a soap opera, I’ll at least strive to make sure it’s not badly written.

Chris Andoe's Society Page is a new monthly column taking you inside St. Louis society at the Riverfront Times.

If you see a drag queen in the mainstream press, odds are Chris Andoe wrote the story. Known as our city’s preeminent LGBTQ nightlife reporter, Andoe served as the editor in chief of Out in STL and is the critically-acclaimed author of Delusions of Grandeur and House of Villadiva.
Scroll to read more St. Louis Metro News articles (1)