Anheuser-Busch: Tales from the Crypt

This comes a couple weeks after the fact, but I thought it interesting enough for a retelling here. A friend of mine works for a moving company, and recently he told me about a job he had over the winter holidays cleaning out the executive suites at the Anhueser-Busch brewery.

Until the InBev acquisition last year, the top floor of A-B's Pestalozzi Street headquarters served as the stomping grounds for brewery luminaries such as August Busch III, August Busch IV, chairman Patrick Stokes and others. Now, according to my friend, it's nothing but "dead space."

Movers spent the week before Christmas clearing out the company's last executive offices. Among the loot hauled from the building were huge bronze medallions engraved with quotes from founders Adolphus Busch and Eberhard Anheuser, a turn-of-the-century mural depicting a harvest, and a horseshoe conference table so big it's rumored it had to be airlifted into the building years ago. 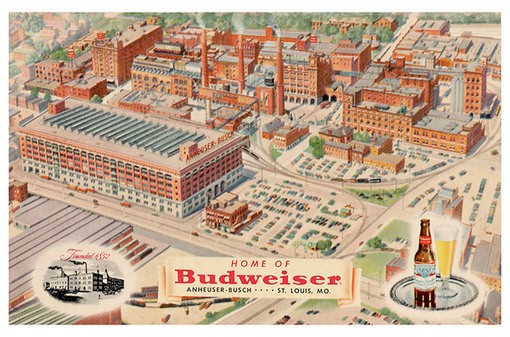 By the time my friend showed up in late December the office of former president and chairman August Busch III was almost totally empty save for an ornamental hutch cabinet.

But the office of his son (and outgoing A-B CEO) August Busch IV was almost completely intact. It was August IV who closed InBev's $52-billion purchase of A-B in November, making him one of the last V.I.P.'s to leave the company. He supposedly walked away with $91.4 million from the sale. His father, August III, collected $427 million, according to reports.

Inside August IV's office movers packed up an exercise bike, a large flat-panel television, and thousands of dollars worth of high-end furniture. Despite his clout with the company, August IV's suite -- equipped with its own bathroom -- wasn't the most luxuriously appointed office on the ninth floor. That distinction would go to some of the company's vice presidents.

"This wasn't the kind of furniture and decor you buy at Carol House," noted my friend. "I was hauling out a desk from an office that someone said was probably worth $10,000."

Down the hall, movers packed up a high-end conference room decorated with a leather floor (yes, you read that correctly, leather) and a glass map of the world that lit up to show all the company's breweries and international partnerships.

Carpenters made wooden crates to store some of the valuables -- including the aforementioned bronze medallions and a mural dating back to the 1904 World's Fair. An A-B archivist was on hand to orchestrate some of the move. Items with historical significance were delivered to a cavernous A-B warehouse in south St. Louis where they'll be stored for safekeeping, a la Raiders of the Lost Ark.

As my friend packed up the last of August IV's suite, he couldn't help but play with the electronic window shades -- opening and closing them to reveal sweeping views of St. Louis and then darkness. He left the shades closed as he departed the empty office.