Ann Wagner Fundraising Pleas Say President Obama Personally Attacked Her -- But Did He?

Update below: Here's one reason to donate to Rep. Ann Wagner, a Republican from Ballwin who represents Missouri's second congressional district: President Barack Obama is personally attacking her.

So says Wagner in recent fundraising tweets and e-mails. "Did you hear what President Obama said about me?" she says in one tweet and "I thought I've seen it all - but when the President attacks you personally- you know you have ruffled some feathers," in another.

There's only one problem, which some critics have pointed out to Daily RFT: Neither the president nor the White House have said anything about Wagner.

Wagner's tweets and a fundraising e-mail forwarded to Daily RFT make references to direct, personal attacks from the president against Wagner in the context of energy debates.

The attacks in question, it turns out, are a reference to Organizing for Action, the latest incarnation of what was formerly the Obama campaign in last year's election. As we've covered here, the group has been active in St. Louis and throughout Missouri on a number of issues, including gun control, immigration -- and climate change.

The organization is no longer affiliated with the White House or the president and is an independent 501(c)(4) nonprofit group that promotes the president's agenda on the ground with campaign-style rallies.

"It's definitely misleading," Alex Sims, Missouri state leader for OFA, tells Daily RFT, "especially if she's referring to the visit of Organizing for Action volunteers, who were nothing but polite and professional and simply asked her for her opinion on climate change." 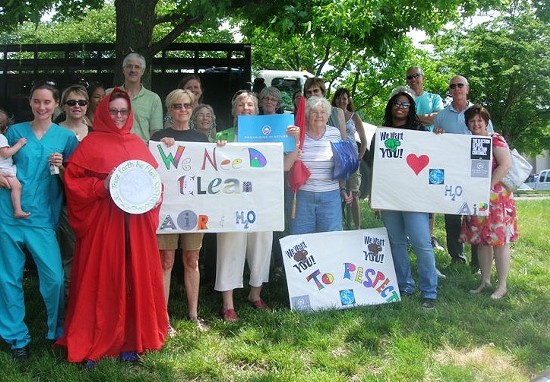 Courtesy of Sierra Club
Volunteers with OFA-MO at the rally at Wagner's office in May.

Sims emphasizes that OFA is independent from the White House and says, "The last thing we would ever want to do is personally attack any of our legislators.... We've never made a personal attack."

Wagner's fundraising e-mail, sent to supporters over the weekend with the subject, "Did you hear what President Obama said about me?" says in full:

I thought I've seen it all - but when the President of the United States attacks you for rejecting his failed energy policies - you know you have ruffled some feathers.

During the last few weeks - President Obama's campaign arm Organizing For Action - has attacked me for saying "NO" to higher energy taxes!

In order to defend the St. Louis region from more taxes, more government and higher energy prices - I need your help.

Please donate $3 or more to my rapid response team to fight back against President Obama's liberal agenda.

With your help - we can secure a more vibrant and prosperous future together.

And the accompanying tweets, which say the attacked her personally:

I thought I've seen it all - but when the President attacks you personally- you know you have ruffled some feathers. http://t.co/PI6staotTH

Did you hear what President Obama said about me? Click here to find out: http://t.co/PI6staotTH

What exactly are the attacks? As we reported, OFA-MO has pressured Wagner to speak out about climate change, highlighting comments she has made dismissing climate science as "unsound."

Reached yesterday, Patrick Howell, a spokesman for Wagner, tells Daily RFT that the comments are in reference to the OFA actions. "Their political e-mails are signling out the congresswoman."

He adds of OFA, "That is his campaign's political arm."

Sims says that OFA has sent out one e-mail calling attention directly to Wagner's questionable stance on climate change. This e-mail blast, full text below, references Daily RFT's report on her controversial climate change comments and urges supporters to speak up.

"We just want to proceed with a meeting with her and other Missouri legislators who aren't acknowledging the impact [climate change] is having in their district."

Update, 11:03 a.m.: Wagner's spokesman Howell sends us this additional statement after we published the story:

Congresswoman Wagner and her staff are always willing to meet with any group, much like they did when OFA came to visit her office. What is truly amazing is the assertion that Organizing for Action claims to have no affiliation with President Obama, especially when they offer a prize to supporters for a one on one meeting and a hug with the president. The hypocrisy is truly laughable.

He also tweeted this at Daily RFT to bolster his argument:

@SamTLevin Can you really say there isn't a connection with @OFA and Obama when they offer a prize to hug him? pic.twitter.com/TH53hBiTeV

Here's the full OFA e-mail that sparked the fundraising pleas and claims of personal attacks by the president.

Climate deniers are everywhere in Congress -- and OFA supporters just drew another one out into the light.

Volunteers have held nearly 100 planning sessions, and had 50 events across the country last week to start the conversation on climate with their legislators.

Get this -- following one of these events, a reporter in Missouri tracked down a letter from Rep. Ann Wagner to a blogger, outing herself as yet another lawmaker who doesn't believe in the overwhelming science on this issue. The reporter confirmed the statements in the letter with the congresswoman's office.

That's exactly why organizing -- and actually raising our voices -- on climate change matters. And it's not all bad news: Dozens of congressional offices expressed their support during last week's Day of Action on climate, and committed to the fight in the months ahead.

If you couldn't make it to an event last week, don't worry -- there will be plenty more chances for you to get involved this summer.

Here's one thing you can do right now: Forward this email to three friends and ask them to join you in working to change the conversation on climate.

There are still many folks out there who question the basic fact that climate change is real -- some very influential members of Congress have even called it a hoax.

We're working to make sure that, at every step of the way, the Ann Wagners of the world will have to answer to their constituents on why they don't believe in science.

Forward this email to three friends right now -- make sure they join the fight to hold climate deniers accountable:

Keep up the great work. Thanks,