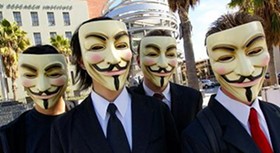 The Anonymous slogan: "We do not forgive. We do not forgive. Expect us."
In the latest of a string of increasingly ballsy attacks, Anonymous -- a loose collective of online ne'er-do-wells -- has trained its sights on the Creve-Coeur-based agri-giant, Monsanto.

Anonymous got national attention for its lively 2008 campaign against the Church of Scientology. But this year, they've taken on targets with much more political and economic clout, such as major credit card companies and just last week an FBI contractor (some 40 members' homes were raided by the feds last January).

Their philosophy is hard to pin down, but Daily RFT will describe it today as "webertarian" ("web" + "libertarian" = see what we did there? Maybe "libertubian" is better). The common thread seems to be a desire to maintain the Internet's chaotic freedom.

The group voiced its displeasure with Monsanto in a video last year, blasting it for alleged "mental slavery, food control and genetic manipulation" (other grievances are now cataloged on anonpad.com).

But only recently have they taken concerted action -- triggered, according to Cnet, by Monsanto's "lawsuits against organic dairy farmers for stating on labels that their products don't contain growth hormones."
No single "anon" speaks for the group, but one of them boasted on Monday

We blasted [Monsanto's] web infrastructure to shit for 2 days straight, crippling all 3 of their mail servers as well as taking down their main websites world-wide.  We dropped dox on 2500+ employees and associates, including full names, addresses, phone numbers, and exactly where they work. We are also in the process of setting up a wiki, to try and get all collected information in a more centralized and stable environment.  Not bad for 2 months, I'd say.

Not accurate, a Monsanto spokesman said in a statement released at noon today:

Today, a number of public and private institutions are facing cyber threats and actions around the world. Such threats are not new and something that Monsanto is constantly working to protect against.  Last month, Monsanto experienced a disruption to our web sites which appeared to be organized by a cyber-group. In addition, this group also recently published publicly-available information on approximately 2,500 individuals involved in the broader global agriculture industry. Contrary to initial media reports, only 10 percent of this publicly-available information related to Monsanto's current and former employees. The list also included contact details for media outlets as well as other agricultural companies. Information on these attacks has been turned over to the appropriate authorities. We remain vigilant in protecting our information systems.