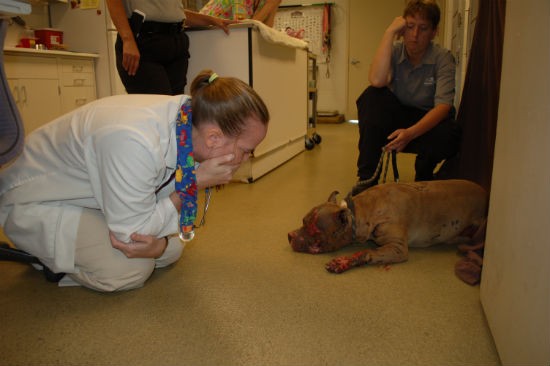 It may seem unimaginable, but another dog has been torched in north St. Louis and did not survive the horrific abuse.

"It is just unfathomable that someone would actually throw gasoline on a dog and set him on fire," Mike Perkins, director of the Humane Society of Missouri Animal Cruelty Task Force, tells Daily RFT. "It was a travesty. Unfortunately, being in the position that I'm in, I see these things all too often. But to know that this dog wasn't hit by a car, this wasn't an injury he sustained running down the block. This is something that someone intentionally did -- it is just unforgivable."

The dog named Zeus, a male three-year-old pit bull, was suffering so terribly that recovery was not possible and he was, the group says, humanely euthanized.

News of this awful case comes the same week that we reported on the latest in the trial of Adrienne Martin, the St. Louis woman accused of lighting Brownie the dog on fire and bragging on Facebook about it.

In this case, the distraught owner of Zeus alerted authorities to the horrific act. The owner told police that the dog had gone missing this week and that a neighbor found him in a backyard -- suffering from the severe burns. Responders arrived to the intersection of Bircher Boulevard and Amelia Avenue in the Walnut Park East neighborhood of north St. Louis and found the dog suffering from severe burns.

The owner gave the dog over to the Humane Society, which determined that Zeus had suffered third-degree burns on 75 percent of his head, from his ears to his nose, with his eyes very badly injured. An additional 30 percent of his body suffered third-degree burns, including his front left paw, which had no pads due to the burns, the left side of his body, his left hip and left leg, and his scrotum.

All injuries clearly came from the torching, the group says.

"He was in great shape [prior]. He was a beautiful dog," says Perkins.

The Humane Society at this time does not believe the owner or the neighbor who located the dog are responsible for the act of cruelty.

But the organization is offering a a $2,500 reward for answers. The group explains in a release:

The Humane Society of Missouri (HSMO) notified the St. Louis City Police Department and is now working with them to investigate the incident. HSMO is offering a $2,500 reward for information leading to the arrest and conviction of the person or persons responsible for the severe cruelty inflicted on the dog.

Anyone with information about this crime is asked to call the Humane Society of Missouri Animal Cruelty Hotline 314-647-4400.

"After a thorough examination by HSMO veterinarians, and because of the massive extent of the dog's injuries and the agonizing suffering Zeus experienced, it was determined the dog was beyond recovery and he has been humanely euthanized," Kathy Warnick, president of the Humane Society of Missouri, says in a statement. "Our Animal Cruelty Task Force will now work diligently to help find the person responsible for this heinous crime."

Perkins adds, "Studies have shown that people who do this to animals will have no problem doing it to people. There's a direct correlation."

He says that while he has seen some similar instances of abuse, "This is a unique and particularly disturbing case."

We have two more photos of Zeus, which we've put on the next page, because they are very graphic and may be upsetting to some readers.

Continue for the additional (WARNING: GRAPHIC) photos of Zeus in his final hours.