Anthony Reyes Update: Injury Could Sideline Him for Season

Ladies and Gentlemen, it is a black day here at The Rundown. I come before you with my hat in my hand and a heavy heart. 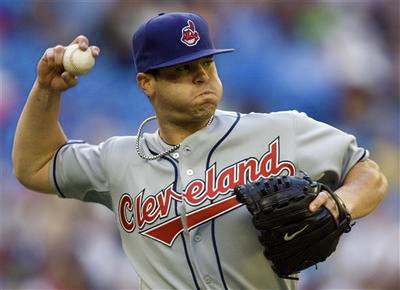 You see, I had expected today to be able to report to you on not one, but two (!) Anthony Reyes starts. I was hoping they would be good ones, of course, and I expected them to be, considering how well he had pitched in his previous outing, but even if they were bad games, there would at least be plenty to talk about.

Sadly, it simply isn't to be. Instead of two outings and a continuing storyline to discuss, I have three innings and an injury for you.

Anthony made what will, quite likely, be his final start of the 2008 campaign for the Cleveland Indians last Friday night. He pitched well, tossing three innings of scoreless ball before leaving the game with what has, to this point, been termed "right elbow soreness."

Of course, elbow soreness is fairly vague, and I don't know that much about the Indians' medical staff, but if it's anything like the Cardinals med staff, Reyes should be receiving his tin-can-and-duct-tape replacement elbow in the mail soon.

After the game, Reyes expressed optimism that he would make his next scheduled start. However, that would have been last night against the Orioles, and Anthony did not take the mound. At this point, with so few games left in the season, you have to assume that the Indians will err on the side of caution and most likely shut Reyes down for the season.

If that is the outcome, it will be a frustrating end to the season for Anthony, who found quite a rebirth in Cleveland after the Cardinals dealt him away just before the July 31 trade deadline.

Reyes' final numbers with the Indians were, to put it lightly, encouraging, with two wins and a loss to go along with a sparkling 1.83 ERA. I've written plenty about the lack of strikeouts for Anthony, but he seemed to be working himself into more and more of a groove all the time, throwing harder consistently, and with improved control as well.

Bottom line, Anthony pitched as well as the Indians could have possibly hoped, and was trending in the right direction at the time of his injury.

Of course, with Reyes's mechanics, you always worry that his next pitch could very well be his last, so you absolutely have to be concerned that this injury is the harbinger of bad times ahead for the man with the Iron Bill.

If nothing else, Anthony at least looks to have gotten a bit of his mojo back, if not his swagger. I can only hope he comes back healthy next season and can help the Indians try to recover from an almost unfathomably disappointing season.